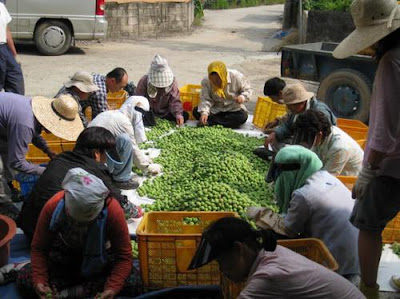 Hankyoreh
Musicians expected to join South Korean union members’ struggle with Cor-Tek and Cort:
Laid-off guitar maker workers seek international support for their reinstatement, and Tom Morello is scheduled for a performance during their visit in Annaheim, California
Posted on : Jan.6,2010

Last year, laid-off workers of the guitar maker Cor-Tek spent their time making red pepper paste instead of instruments. Lee In-geun, head of the Cor-Tek Union, explained somewhat embarrassedly, “We were looking for a way to earn a livelihood.” Twenty of the company’s workers found themselves locked out by the company in 2007, and latched onto vegetable farming early in 2009 after the company continued to refuse to engage in collective bargaining or reinstate them. The workers claimed an abandoned field on a sloping road on the outskirts of Daejeon. For all of them, it was their first experience with farming. They busied themselves with irrigation planning and worried that the field might be lost in the rainy season. They worked as day laborers at a plum orchard in Yeongdong, North Chungcheong Province, and instead of taking wages received plums, squeezed out the juice and put it into pepper paste. Lee said, “Everyone said if we have no work to do, let’s farm or something, but farming has turned out to be a lot tougher than making guitars.”

When their first red pepper paste products came out in September 2009, they were happy to have something to rely on until they were reinstated. One of the former Cor-Tek workers said, “Everyone was pretty proud to hear people saying the red pepper paste was delicious.” However, their hands still yearn for guitars. The field they are cultivating is not far from the factory where they used to work. Lee explained that they all see the farm as temporary.

Workers at Cor-Tek, an internationally recognized guitar maker, and Cort Musical Instruments Co. lost their jobs when the companies issued mass layoffs in 2007 and 2008 and locked down all of their Korean factories. Although Cort Musical Instruments generated total profits of more than 80 billion Won between 1996 and 2007, it justified laying off workers due to losses in 2006 of 850 million Won. The dismissed workers received a judgment in favor of their reinstatement from the National Labor Relations Commission and a ruling from the Seoul High Court that their dismissal was inappropriate because it did not meet the conditions for “urgent administrative necessity,” but the companies refused to budge.

The laid-off workers from both companies are leaving for the U.S. on Friday. They plan to visit the annual International musical instruments stage lighting and sound technology exhibition (NAMMSHOW) taking place in Annaheim, California, and will be giving street performances as part of their campaign to inform people about the companies’ inappropriate labor practices. Bang Jong-un, head of Cort Musical Instruments Union, said, “We intend to tell the world’s buyers and consumers about the real situation regarding the dismissed workers, and to get their support for a quick resolution from the companies.” This is their third “fight overseas,” following attendance at music instrument fairs in Germany and Japan. Tom Morello, guitarist for the world-renowned rock group Rage Against the Machine, is reportedly scheduled to give a performance and statement of support during their U.S. visit.