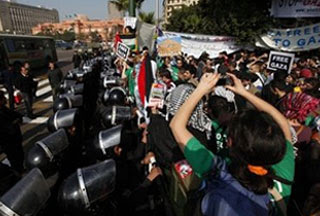 Image source/ caption: same as the link below
'Gaza Freedom March activists chant slogans in front of Egyptian riot police during a protest
at the center of Cairo, Egypt on Thursday, Dec. 31, 2009.'

* Imformed at the Information Clearing House

Organizers of the "Gaza Freedom March" report the death of a French citizen from injuries sustained at the hands of security forces during a demonstration in the Egyptian capital, Cairo.

Marie Renee died in the Cairo Hospital. She was traveling with a French delegation of approximately 300 nationals, Ma'an news agency reported.

The French delegates had earlier been camped out on the grounds surrounding the French Embassy in Cairo, reportedly flanked by two lines of Egyptian police.

Hundreds of activists with the "Gaza Freedom March" have continued demonstrations and sit-ins in Cairo to protest the Egyptian government's refusal to allow them to cross the border into the besieged Gaza Strip.

On Wednesday, Egyptian security allowed 84 of the 1,300 who registered to participate in the Freedom March into Gaza. All were traveling with the Codepink delegation, which organized two earlier trips into the blockaded Palestinian coastal sliver since the Israeli war on Gaza last year.

Another 1,200 activists from about 40 states remained in Cairo after Egypt refused entry for the group because of what they called the "sensitive situation" in the Palestinian territory.

The "Gaza Freedom March" activists were hoping to march into Gaza on the anniversary of Israel's 22-day offensive on the territory as a sign of solidarity with its people, carrying with them aid and supplies.

Israel has continued to close all border crossings to the Gaza Strip for more than two years. The illegal Israeli imposed blockade on the Gaza Strip, which has steadily tightened since 2007, has had a disastrous impact on the humanitarian and economic situation in the coastal enclave.

Some 1.5 million people are being denied their basic rights, including freedom of movement, and their rights to appropriate living conditions, work, health and education. Poverty and unemployment rates stand at approximately 80% and 60% respectively in the Gaza Strip.

Egypt, with the Palestinian Authority's blessings, has sealed its borders with the Gaza Strip, effectively cutting off the coastal enclave from the rest of the world.
Posted by NO Base Stories of Korea at 6:38 PM