Text Fwd: [Jeju] The ceremony for the Naval Base, planned on Feb. 5, was abruptly delayed to no defined term 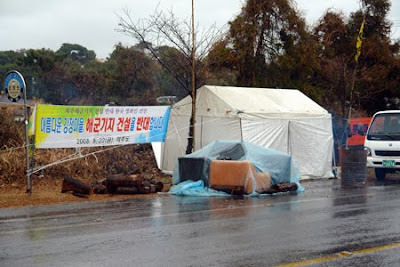 * In the photo, the banner says, ‘We oppose the Jeju naval base in the beautiful village, Gangjeong,’
while the yellow flag says, ‘Desperately No Naval base’

* According to Seogwipo newspaper on the date of Jan. 28, the Gangjeong village council has set up the tents
[photos here] on Jan. 27, in the planned area of the ceremony on Feb. 5
(as of Jan. 28, it was announced to be postponed) to oppose the naval base construction.
The newspaper says the potential accidents following an enforced ceremony are concerned about
because the village people are protesting through the tent vigil. It also says the ceremony would be held in the
Jeju naval base construction planned area of the empty land which is western side of near the Poonglim Condo. 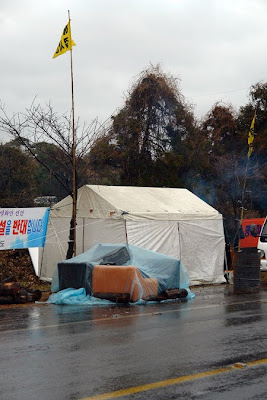 * It is the translation of part of the Sisa Jeju article on Jan. 28:

‘How do the Gangjeong village people think about
the postponement of the ceremony for the naval base?
Mayor, Kang Dong Kyun showed the skeptical response to the position of Jeju Island that the Island position had been accepted. Mayor Kang saying that, “ It can not be that the ceremony was postponed, hearing Kim Tae-Hwan, the Island governor”, analyzed that, “ There might have been the factors of the Prime Minister Chung Un-Chan’s busy schedule or other stories.” Even though saying that, he told, “If [the governor] delivered to the central government his position that the naval base business should be driven, reflecting up-most of our views that the ceremony should be postponed [at least] after the court decision of the administrative lawsuit. We will watch [him]. Mayor Kang saying,“the ceremony for the naval base was only for a while postponed”, emphasized that, “The view of the Gangjeong village people, [that there should be no naval base] has not changed.”

* Below is the arbitrary translation of the Media Jeju on Jan. 28, 2010.
Media Jeju
The ceremony to start the work on the naval base construction, planned on Feb. 5, this year, was abruptly delayed to no defined term:
The Jeju Island says it “requested to the navy because there remained the problem of the process”
Jan. 28, 2010, Media Jeju, Kim Doo-Young reporter (kdy84 (at) mediajeju.com)

According to the Jeju naval base business committee on Jan. 28, the ceremony to start to work of the so called, civilian-military complex beauty tourism sea port was delayed, by the request of the Jeju Island.

The Jeju Self-Governing Island stated [on Jan. 28] through the separate press release that, [the Island] “delivered the message to the central government, regarding the Jeju naval base business last [Jan.] 22nd, of its position that the change of the ceremony date is unavoidable, because the administrative procedures such as the discussions on the permission of the reclamation on the public sea area and land compensation are still being processed and because the lawsuit for the confirmation on the cancellation of the approval on the executive plan of the defense & military facility, has been submitted”

The Jeju Self-Governing Island explained that [the Island] “ decided such position, for up-most reflecting the claim of the Gangjeong village people, that the ceremony should be delayed at least after the court decision on the administrative lawsuit, for preventing the cause of the villagers’ conflict, and for the decision that the business should be driven with the Jeju Island people’s understanding [of the naval base construction business.”

The Commander, Park Sung-Soo, of the Jeju naval base business committee announced the reason of the postponement of the [construction] of the naval base that, “ Because the visit by the Prime Minister [on Feb. 5] seemed difficult so there was the need to adjust the schedule and because there was the request by the Jeju Island to reflect the position and emotion of the Jeju Island people, the postponement [of the ceremony] was decided.”

Following that decision, the ceremony to start the work on the Jeju naval base construction is expected to be realized after the court decision on the administrative lawsuit against the Minister of the National Defense department, which is mooring in the Seoul Administrative Court.

* According to a Jeju activist, the above lawsuit was applied in April, last year, and is expected to be brought with the court decision around the end of the February. The lawsuit is different from the mentioned yesterday, which was raised on Jan. 27, 2010.


# Mayor, Kang says, he was “embarrassed by the abrupt postponement [of the ceremony] but thought it was fortunate.”

Kang Dong Kyun, Gangjeong village mayor, said by phone with the Media Jeju that, “ [I was] embarrassed by the abrupt postponement of the ceremony but think it is fortunate now, in the first place.”

While the conflicts are being intensified as the Gangjeong village people who have protested against the naval base construction ceremony, have been taken away to the police stations, the result ahead whether the postponement of the ceremony which was for partly accepting the demand of the Gangjeong village people, would be the beginning of the resolution of the conflict around the naval base or not, is to be noticed.
Posted by NO Base Stories of Korea at 1:25 AM