[No Jeju Naval Base] Update and the Videos taken by the Gangjeong Villager on Jan. 18, 2010

Please sign to the petition against the Jeju naval base: Send name, (organization), city, country to Bruce K. Gagnon(globalnet@mindspring.com) space.4peace.org 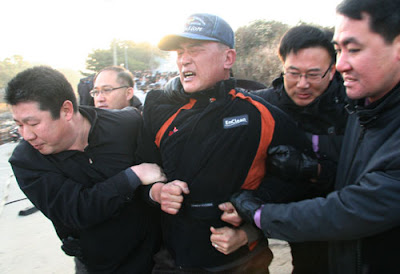 * Mayor Kang Dong Kyun was arrested on Jan. 18 during the struggle against the naval base and
got the restraint warrant today. He is the only one who was not released.
RELEASE MAYOR, KANG DONG KYUN! ( *Image source: Seogwipo daily Newspaper)
Except for the mayor, Kang Dong Kyun,who was the most devoted mayor ever for the struggle against the naval base construction in the Gangjeong village, Jeju Island, all the arrested 46 people including the Secretary Go Yu Gi, yesterday were released by today. The village people are preparing for the appeal for the prompt release of mayor, Kang Dong Kyun who got the restraint warrant.

The international solidarity messages are overwhelmingly flooding. They are near 50 messages at this time and have been continuously flowing in. The Jeju organizations want to happily announce on it tomorrow morning to the Korean press.

The Sisa Jeju reported today that Bruce Gagnon’s global petition and international movement, are spreading throughout many countries to the peace-loving people all over the world (Click HERE)The article also introduced the Pressenza article with the Gangjeong photo. The Afterdowning Street is also known to cover the news. Please click HERE.

Please keep to pressure the South Korean government and/or South Korean embassy in your country to complain about the brutal oppression against the people and the naval base plan. And please demand the RELEASE OF THE GANGJEONG MAYOR, Kang Dong Kyun who was one of the direct motivations for Bruce Gagnon’s international petition.

Flooding international pressure is not only the biggest help for the poor people in Gangjeong but also preventing another missile defense system in the world.

Videos on the struggle of the Gangjeong village on Jan. 18, 2009

The videos were taken by a villager, Mr. Kim Min Suo on the day. Mr. Kim says he has uploaded the videos in the Korean website but found they were later removed by the site manager.

According to him, the time is from 7 to 8am on Jan. 18, before the activists in the Jeju city, could arrive in the Gangjeong village.

In the videos, the village people are preventing the navy and police to enter the construction site near the bridge gate of the Gangjeong stream. The police are announcing the warning three times. In the last video, you can see the mayor, Kang Dong Kyun, he says.

The Mayor Kang Dong Kyun is the only one who was not released . He got the Restraint Warrant that was totally baseless. WE DEMAND HIS RELEASE SOON!

‘In the video, [the police chief with] the navy is saying the land has become to be owned, by the Ministry of the National Defense, on Sept. 24 last year and the village people are illegally occupying the land. The village people who have watched all the illegal and improper processing and passing of the bills on the naval base, by the Jeju special government and the Island assembly, in the snatched-way, are strongly protesting, chanting, “Absolutely No Naval Base”.

It is heard that the mayor was blocking the navy and police with his own body behind the fire. And the police, ignoring his safety attacked the mayor. The informant in the village says the mayor must have been greatly wounded during the body struggle.

There are more stories coming about the people who got wounded during the struggle. One man had to get the bandage in his leg.’ (Bruce Gagnon blog)

Posted by NO Base Stories of Korea at 8:04 PM