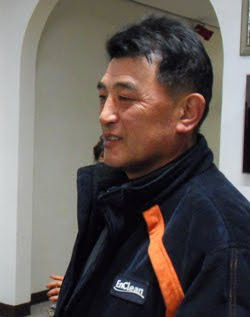 Mayor Kang Dong-Kyun who did the two day hunger strike in the detention room after his arrest on Jan, 18 is smiling after his restraint warrant were turned down by the judges on Jan. 20. (Image source: Sisa Jeju) 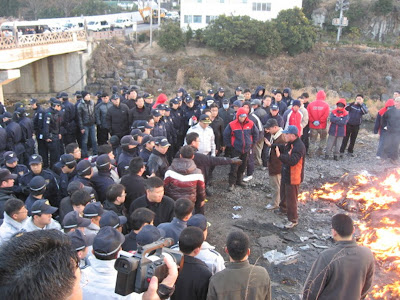 *The above photo is by a villager, Kim Min Sou, on Jan. 18, 2010. Mayor Kang Dong-Kyun is preventing the navy and police to enter the planned construction site. It was around 6am when the press could be seldom shown. The village people had made the barricade with the burnt vinyl against the expected police violence and forceful construction of the site for the Feb. 5 navy’s ceremony on starting to work on the naval base. The police dangerously attacked him from the behind and tackled him later, giving the mayor much suffering.

Just In : Mayor, Kang said by phone that he was now looking at all the translated international messages and was very much encouraged. He said he had felt it was a lone struggle but now, not such like that any more. He expressed lots of thanks to all the international friends to send the solidarity messages and to encourage the Gangjeong village people. He also said he was determined to fight to the end, against the naval base.
• summary of the Sisa Jeju article on Jan. 20, 2010

The mayor practiced the two days hunger strike in the detention room of the police station. Welcomed by the village people and activists, he said, “Even though it is true that we violated the law, it is same with the navy and the police who thrust us to do that by practicing the institutional violence.”

To the question on the future plans, Kang saying, “ I will discuss with the village people on them but I am determined to fight to the end against, the navy and police, if they push the actions, while the administrative lawsuit is not finished yet”, announced that “[He] would keep his Gangjeong village by searching the other various measures rather than clash with [the police and navy].” 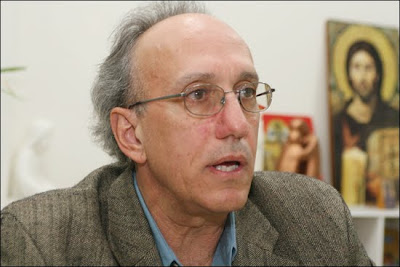 'Bruce Gagnon' Oct. 2009ⓒJeju Sori
* The Jeju Solidarity for Participatory Self-Government & Environmental Preservation announced the Press Release today, reporting about the flooding news of the International solidarity messages after the news of the Jan. 18 raid on the Gangjeong village people, was spread internationally through Bruce Gagnon who had started the International petition for the solidarity with Gangjeong people on Jan. 11. The organization also summed up some 11 international messages from Japan, Mongolia, Australia, Canada, Chile, United Kingdom and the United States after Jan. 18 raid. The message from Puerto Rico, Australia, Japan and Italy had been already introduced. The senders after Jan. 18 included the more than 20years-long Aegis Destroyer worker, Peter Woodruff in Bath Iron Works in Bath, Maine and former USFK air force officer.

The Press Release also introduced the Catholic groups' activity against the naval base in the Jeju Island: http://cafe.daum.net/catholicpeoplepower.

People’s Media on the Jeju Protest is surreptitiously oppressed
It has been found that all the photos and videos about the Gangjeong village people’s Jan. 18 struggle have been hideously removed in the domestic and overseas uploaded sites. This site experienced the same. See HERE. The activists here think it may be the acts of the Ministry of the National Defense, ROK and/or National Intelligence Service. The right to speak and to inform is surreptitiously oppressed regarding the issue of the struggles against the Jeju naval base construction.
Posted by NO Base Stories of Korea at 7:23 PM