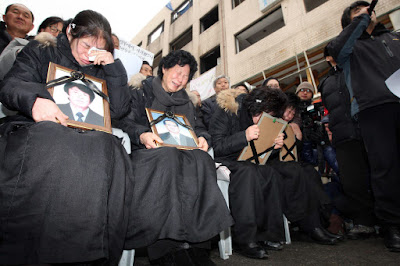 * Image source: caption: same as the article below
'Bereaved family members, who lost their loved ones in the Yongsan tragedy, shed tears during the press conference held in front of the Namildang Building, the very site of Yongsan tragedy, Dec. 30.' 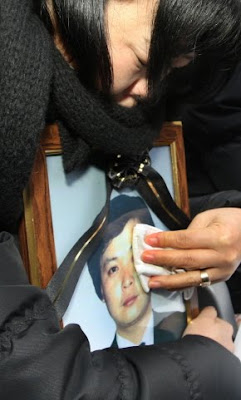 * Image source: caption: Hankyoreh
'Yoo Young-sook, a bereaved family member who lost her husband in the Yongsan tragedy, sobs while stroking the portrait of Yun Yong-heon during the press conference held in front of the site of the Yongsan tragedy to publicly announce the deal reached with the Seoul Metropolitan Government, Dec. 30.'

Hankyoreh
The Seoul Metropolitan Government and Yongsan tragedy family members reach a deal:
As preparations are underway for a public funeral, Justice for Yongsan Evictees and bereaved family members say they will continue to press for a full investigation
Posted on : Dec.31,2009 11:22 KST

After nearly a year of conflict and turmoil, a deal was reached Dec. 30 to resolve the issue of the “Yongsan tragedy,” which took place in January. Prime Minister Chung Un-chan publicly acknowledged responsibility for the occurrence of the tragedy and expressed his dismay to the family members of the victims.

The Seoul Metropolitan Government and Justice for Yongsan Evictees, a group co-chaired by Jo Hee-ju, held press conferences at noon Wednesday where they separately announced that an agreement on a government apology and compensation in connection with the tragedy had been reached, and that a funeral for the victims would be held on Jan. 9, 2010.

While it was stated that the association for the Yongsan 4th Zone Urban Environmental Improvement Project would take full responsibility for providing consolation money to the victims’ families, tenant compensation, and some 700 million Won in funeral home usage fees and funeral expenses, itemized particulars about the scale of compensation were not announced. It has been reported that the total compensation, however, may be somewhere in the neighborhood of 3.5 billion Won (3.1 million U.S. dollars). Immediately after the deal was reached, Justice for Yongsan Evictees formed a funeral committee, and the decision was made to hold a funeral open to the public.

At the press conference held by Justice for Yongsan Evictees, Jo said, “The family members and Justice for Yongsan Evictees have persisted in calling on the government to acknowledge its responsibility and issue a government apology as well as a guarantee for the livelihood of the surviving family members and evictees, and to provide arrangements for a funeral for those who lost their lives.” Jo stated that most of the demands have been accepted.

Jo continued, “Holding a funeral does not mean that the Yongsan tragedy has been resolved.” He added that his group has plans to continue to press for an investigation of the facts behind the forcefully evicted tenants’ deaths, punishment for those responsible, and improvements to problem areas that exist in “New Town” redevelopment policy.

Prime Minister Chung also issued a public statement following the deal that said, “Wherever the cause lies, the Yongsan tragedy is an unfortunate incident that should not have occurred in this day and age.” It also said, “As Prime Minister, I feel responsibility for the occurrence of this unfortunate incident, and I once again wish to express my profound dismay to the bereaved family members.”

The family members and tenants and the redevelopment association have agreed to not pursue civil or criminal action against one another and have made plans to form a seven-person committee, which would include religious leaders, to ensure the terms of the agreement are enforced.

The tragedy took place at 7:00 a.m. on Jan. 20 when a police commando unit attempted to forcibly suppress a protest of 30 individuals, including evictees from the Yongsan 4th Zone redevelopment region, who were occupying a tower on the roof of the Namildang Building on Hangangno 2-ga in Seoul’s Yongsan District and demanding that measures be taken to address infringements to their rights to a livelihood. Six people were killed as the tower caught fire, including five protestors and one commando unit member. At the time, the police were publicly criticized for actions taken to suppress the protest 25 hours after it began as an “unreasonable exercise of public authority.”

Immediately following the tragedy, civic groups and family members of the victims joined together to form the group Justice for Yongsan Evictees, which for close to one year has not been able to hold a proper funeral for the victims and has been calling for an investigation, the punishment of those responsible, a government apology and compensation. In the months that followed, the ruling government and Seoul City determined that the incident occurred due to the “fault of the evictees” and public authorities refused to acknowledge any responsibility for the tragedy. In addition, they refused to provide compensation to the victims’ families on the basis that there was no corresponding law to justify it.

Meanwhile, three individuals wanted by police in connection with the Yongsan tragedy, Justice for Yongsan Evictees co-presidents Lee Jong-hoe and Park Rae-gun and Federation Against House Demolition head Nam Gyeong-nam, are preparing to leave Seoul’s Myeong-dong Cathedral where they have been granted asylum once the funeral has been held.

Hankyoreh
Catholic priests of “Namildang Church” hold their last Life and Peace Mass for the Yongsan tragedy victims:
Catholic Priests' Association for Justice prepare for the final memorial mass for Yongsan tragedy victims scheduled for Jan. 6 and meanwhile continue to urge the government for changes in the city's development plan
Posted on : Jan.1,2010 11:43 KST

Posted by NO Base Stories of Korea at 4:44 AM