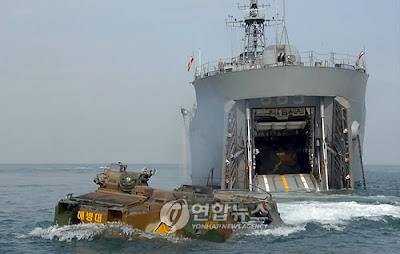 Image source/ caption: Yonhap News
‘S. Korea to join multinational drill in Thailand:
Jan, 8, SEOUL, South Korea -- South Korean navy and marine corps will join "Cobra Gold," a U.S.-led annual multinational exercise in Thailand that will start on Jan. 28 this year. It is the first time for South Korea to send troops to the drill, although it has previously joined as an observer. (Yonhap) (Photo courtesy of Navy)”
Korea Times
01-08-2010 19:44
Marines to Join Drills in Thailand
By Jung Sung-ki, Staff Reporter

About 330 South Korean Marines and sailors will participate in the U.S.-led multinational Cobra Gold exercise in Thailand to hone their joint humanitarian and peacekeeping operational skills with other nations, the Navy announced Friday.

Cobra Gold is a joint exercise designed to ensure regional peace and strengthen the ability of allied forces to respond to regional contingencies.

South Korea has taken part in the drill, which the U.S. and Thai armed forces began in 1982, since 2002 as ab observer.

The exercise has expanded to include Singapore, Japan and Indonesia. Observers include Australia, Canada, China, France, Germany, India, Italy, Mongolia, the Philippines, the United Kingdom and Vietnam.

The South Korean Marine Corps will dispatch 187 troops, along with eight amphibious assault vehicles — a 2,600-ton landing ship tank. A total of 146 Navy sailors will accompany the Marines, according to the release.

The Korean Marine Corps is the second largest in troop strength in the world, with more than 27,000 personnel. The service saw action during the Vietnam War, fighting alongside the U.S. Marine Corps and Navy SEALs. During the war, the Korean Marines were never defeated on the battlefield, earning nicknames such as "Ghost Busters."

During the 1950-53 Korean War, the South Korean Marines successfully carried out the renowned Incheon landing operation with the U.S. Marines to reclaim the capital of Seoul, then occupied by North Korea.