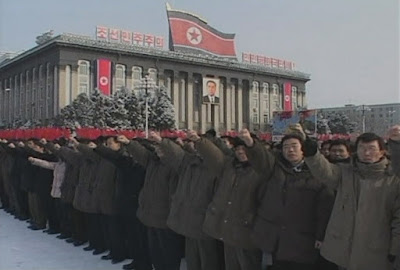 * Image source/caption: same as the link below
'In this photograph released by APTN, people are punching their fists into the air during a rally held at Kim Il Sung Square in Pyongyang, North Korea, Jan. 2. Tens of thousands of North Koreans rallied in the capital Saturday to support the communist government‘s policies for the new year, including improved relations with the U.S. and South Korea, and a higher standard of living. (APTN)'
Hankyoreh
[Analysis] North Korea’s New Year’s Day joint editorial on peace and the economy:
N.Korea holds back on criticisms against S.Korea and the U.S. and conveys goals of regime stability and resumption of inter-Korean cooperation projects
Jan. 4, 2009

The New Year’s Day joint editorial in North Korea’s Rodong Sinmun, Korean People’s Army Daily and Chongnyon Jonwi was almost unprecedented in terms of content and format. In terms of format, as the editorial’s headline suggests, “Let’s Make a Decisive Turning Point in the Life of the People on the 65th Year of the Founding of the Party by Once Again Spurring Light Industry and Agriculture,” it took on specific pending issues. This is quite different from the past, in which the joint editorials were given abstract and vague headlines like “Prime Time of Songun Korea” (2007), “Year of Historic Turnabout” (2008) and “Revolutionary Upsurge” (2009). In terms of content, there was a reduction in bellicose rhetoric and in general, it conveys a flexible attitude. Particularly noteworthy is the complete lack of criticism aimed at South Korea and the U.S.

The focus of the joint editorial was on the economy and specifically on “improving the life of the people.” It presented the improvement of the people’s lives as the major goal for the year, and referred to it as a political project that would attain the teachings of late North Korean leader Kim Il-sung and legitimize the great works of the party. Accordingly, the joint editorial called for active foreign trade. This was in contrast to the past, in which the joint editorial placed an emphasis on Songun, North Korea’s “Military First” policy, and defense industries.

The joint editorial’s direction was not, however, pro-market reform and openness. It presented a methodological solution that included boosting light industrial and agricultural production, insuring the stability of free medical care and free compulsory education, holding fast to socialist principles in distribution, and firmly establishing planning, fiscal and labor administration regulations. The editorial content clearly indicates that North Korea is trying to ensure regime stability by rebuilding its planned economy and socialist welfare system.

The joint editorial describes North Korea’s position to improve inter-Korean relations based on the June 15 Joint Declaration and October 4 Declaration as firm, and conveys the country’s intention to press forward with visits and contacts at all levels in order to resume cooperation projects. The Choson Sinbo, the official publication of the pro-Pyongyang Chongryeon or the General Association of Korean Residents in Japan, cites the two inter-Korean summits and suggests the possibility of a third summit this year together with dramatic changes in inter-Korean relations. A South Korean government official, however, says Seoul is calmly taking the joint editorial as consistent with North Korea’s conciliatory line that has been articulated since last August.

The joint editorial suggests the fundamental issue in guaranteeing peace on the Korean Peninsula is ending the hostile relationship between North Korea and the U.S., and that North Korea’s consistent position is to build a firm peace regime on the Korean Peninsula through dialogue and negotiations and to realize denuclearization. This is a reassertion of North Korea’s existing line that it will be placing an emphasis on building a peace regime during talks with the U.S. and through the six-party talks. The stipulation of dialogue and negotiations is being read as a message directed at U.S. President Barack Obama prior to the anniversary of his first year in office.