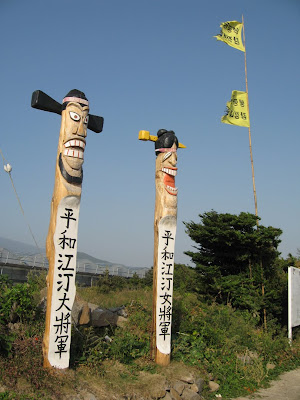 Totems near the spot where Navy base would be built on Jeju Island
Bruce Gagnon blog
Sunday, January 24, 2010
PACIFIC ISLANDS MUST UNITE AGAINST MILITARY BASES

"Each day we are getting more emails from folks around the planet who are learning about the Navy base plan and who are looking for ways to support the people of Gangjeong village. Just today we heard from an American artist who is now on Jeju Island and wants to contribute her environmental art to the effort. We also heard today from a political science professor at American University who specializes in researching foreign military bases. So the word is getting around.

* Also in recent days there has been a flurry of emails between activists about the important connection between these base struggles on Jeju Island, Okinawa, Guam, and Hawaii. Each of these islands is being heavily militarized as part of the U.S. strategy to double its military presence in the Asian-Pacific. All of these places face similar issues of environmental degradation due to militarization. There needs to be a greater linking of these island struggles into a coordinated sharing of strategy and resistance. Maybe a good start would be a speaking tour of one person from each of these islands that would visit the U.S. , Europe, and beyond. I would bet that anti-NATO movements in Europe would be very interested in learning more about these island base campaigns as the ever expanding NATO offensive military alliance is now moving into the Asian-Pacific region.

In a small town election that may have a big impact on U.S. ties with Japan, voters in Nago on Okinawa island chose a new mayor Sunday who opposes the relocation of a noisy U.S. military air base to his town.

The United States and Japan agreed four years ago to move the U.S. Marine Corps Air Station Futenma, now located in a dense urban area in the center of Okinawa, to Nago, a town of 60,000 in the thinly populated northern part of the tropical island. It was to have been built on landfill along a pristine coast on the edge of the town.

But to the exasperation of the Obama administration, that deal was put on hold last fall after the election of a new government led by Prime Minister Yukio Hatoyama, who says Japan has been too passive in its dealings with the United States. Hatoyama has suggested that the base should be moved off Okinawa or out of Japan altogether -- and has also said that the outcome of the mayoral vote in Nago would be a factor in his government's final decision, which he has promised to make by May.

Posted by NO Base Stories of Korea at 9:05 PM