Text Fwd: It's a long march to freedom 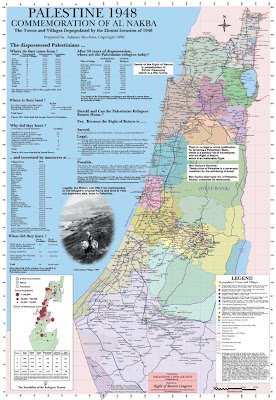 Just one year ago, Gaza and its people were subject to the ultimate crime, victims (both living and dead) of the genocide of the Palestinian people. It is a genocide that began 61 years ago, and it’s had moments of escalation, the peak of which was reached with the attempted destruction of part of Palestine; Gaza, although this is just the most macroscopic attack. The genocide began the moment that it was “decided” to take Palestine away from Palestinians. Responsible for this genocide is the State of Israel and its various lobbies, which is aided and abetted by the governments of the United States, the EU and most of the Arab countries as well as getting logistic coverage from the Nato and biased support from the mass media of most of the West.

None of that should surprise anyone who has been following, and unless someone only learned about this state of affairs recently, volumes have been written about it, and it would only be repetitive to discuss the reasons of this theft and the problems encountered in reversing it and obtaining justice in this brief article.

What instead seems to be a cause of wonder of many of us who have been “in activism” either because we were born Palestinian, or this cause has been our focus, is how no matter what happens to Palestinians, it’s always someone else getting the attention. What seemed like a dream come true to almost all of us, to stop “talking and analysing” and to “take action” instead deflected attention from Palestinians and onto the heroic “Westerner”. Far be it from the minds of any of us to criticise the fine men and women who left their homes and families for a trip into the unknown, to be part of a march, a convoy or a demonstration. The fine ideals of most of them is not put in doubt at all, indeed, it’s humbling that there are so many people moved so deeply by the pain of others that they put their bodies on the line.

However, what we have seen, and what saddens us, is that there are still layers of doubt surrounding these actions and that anyone who dares question them, because there are indeed some very dark corners that need investigation, is treated as if they do not hold the interests of the Palestinians at heart, or worse, that they are conniving with the enemy. We are not watching a film of Robin Hood, but we are witnessing deliberate focusing upon a certain set of actions, and the shift of attention from certain players to others, and deliberate misrepresentation of the expressions of people in order to promote a specific agenda.

Observing, as most of us are, from the outside, we can look for instance at the emails we get, the Facebook invitations and groups that spring up, the types of commentary we see, and one thing does stand out: the build up was fantastic! We were approaching the anniversary of the war against Gaza, and we were arranging to give it the maximum exposure. Some prepared films, conferences, protests in their towns. In the world of communication, so many of us participated along with thousands of others in a Twitter action to bring the word Gaza to the attention of the public, then we shifted to GFM (Gaza Freedom March), spending an entire day in an organised effort. Our sites carried the information of the activist events, stressing what priorities to hammer home (lift the siege, all of Palestine is occupied, push for justice for war crimes). It was a time of a lot of movement, in preparation for this crucial event. Of course, we knew our mainstream media wouldn’t carry much, so we were ready to bombard the alternative media and our streets. We had banners to hang from our windows, black arm bands to wear with our keffiyahs, and the holiday shoppers would also become aware by our presence and leafleting. Yes, it’s got to be admitted, it seemed that this might be a watershed moment to make Palestine present.

However, something happened. Rather than talk about the Gaza war and making Israel receive a quantity of publicity that it thought it might escape getting as it has thus far, the activists were protesting against Egypt. That seemed to be the shift in the focus that took many of us by surprise and shock. Not only, the great momentum of activists pointing out the Israeli crimes, especially in Gaza, but all throughout its history, was basically instructed to just stop full out and protest against Egypt. If that were not enough, activists were encouraged not only to make phone calls (we all made them, asking them to let the convoys in, protesting the Steel Wall and asking them to open the Rafah gate once and for all) to the Egyptian authorities in our countries, but we were asked to start to promote towards boycotting Egypt.

It must be admitted, we started to plan for that, although most of us have been doing BDS campaigning non-stop against Israel for years. It would require more than an emotional appeal to be able to decide if this was the effective solution to Palestine’s occupation.

Then, with all of the relentless phoning, messaging, emailing, communicating actions to do “now”, we realised we had no time to reflect on this strategy, and this is always a mistake. If one does not have a strategy, a goal that they are aware of the variables and players, things start to get complicated. We did ask ourselves a few questions: why the shift, so suddenly and the protagonists are Internationals, as if it was not necessary in the past to protest against the actions of any country that had penned in or in any way constricted or obstructed Palestinian rights. Why was it that the enemy, the MAJOR enemy, was shifted to Egypt and only NOW and not all during the siege? How did Israel get let off the hook in less than one day, and WHAT a day!? What is up with that, we asked one another. No one was even talking about US complicity, it seemed as if the whole problem was Egypt, and the whole solution was Egypt. And worse, that the only thing to be liberated was Gaza, and not all of Palestine. What a nightmare for a Palestinian, some of us thought, to have their struggle be co-opted into some other agenda.

READ MORE
Posted by NO Base Stories of Korea at 10:33 PM