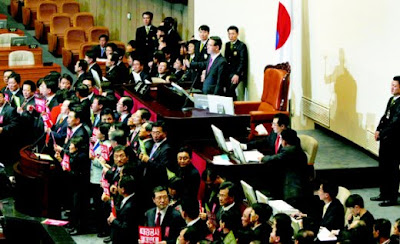 * Image source/caption: Same as the link below
'Kim Hyung-o, speaker of the National Assembly, announces the passage of the 2010 budget as opposition parties lawmakers surround him in protest in the plenary session room of the National Assembly, Dec. 31.'
Hankyoreh
South Korea’s GNP railroads 2010 budget:
As controversy brews over the legality of the budget bill’s passage, analysts note that the budget for the Four Major Rivers Restoration Project leaves intact a semblance of the Grand Canal Project
Jan. 1, 2009

During the evening of Dec. 31, lawmakers from the GNP, the Pro-Park Geun-hye Alliance, and some independent lawmakers participated in the passage of the budget bill with 174 votes in favor, 2 opposed and 1 abstention. Meanwhile, lawmakers from the Democratic Party (DP), Democratic Labor Party (DLP) and Liberty Forward Party (LFP) refused to participate in the vote and shouted, "The vote is ineffective."

Despite the passage of the budget bill, analysts say controversy will continue over its legality due to changes made in the location where the vote was scheduled to take place. GNP lawmakers held the vote in a room other than the Budget and Accounts Committee room since DP lawmakers who were protesting the vote had occupied it.

GNP lawmakers informed DP and other opposition lawmakers early Thursday morning of the change being made to the Budget and Accounts Committee room. At 7:25 a.m., immediately after the change of room notice was given, GNP lawmakers passed the revision to the 2010 budget bill with primarily GNP lawmakers in attendance.

The budget bill revision passed by the GNP increases the budget by 1.36 trillion Won to a total of 292.82 trillion Won. In addition, the revision bill reduces the budget for the Four Major Rivers Restoration Project by only 425 billion Won and leaves budget lines for weirs and dredging intact. The latter has been the focus of controversy due to suspicions that the weirs and dredging are part of a preparatory stage for President Lee Myung-bak's Grand Canal Project.

Chung Mong-joon, chairperson of the GNP, emphasized the legality of the budget bill's passage by saying, “There was no other alternative due to the DP lawmakers' actions.” Lee Kang-rae, floor leader of the DP, response was, “The 2010 budget is invalid because GNP lawmakers have violated the National Assembly Law, which stipulates a ban on changes to committee rooms in order to prevent precisely this kind of railroading of bills from happening.”