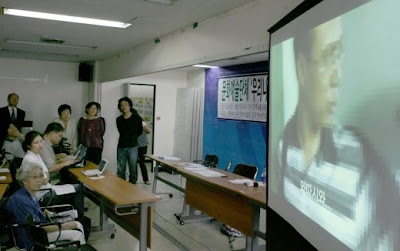 * Image source/caption: Same as the article below

'Members of Woorinar[a] (our nation), an art organization, hold a press conference at the office of Jinbo Corea located in Seoul’s Youngdeungpo neighborhood to publicly announce an allegation of being kept under surveillance during its performance in Japan on August by South Korea’s Defense Security Command (DSC), Sept. 16.'

Hankyoreh
DSC agent caught keeping surveillance over arts organization in Japan: Members share footage of an agent confessing to being ordered to keep tabs on them while in Japan for a performance for possible national security violations

The members of Minju net or Network for Democracy consisting of 80 civic organizations, including Jinbo Corea, held a press conference at the office of Jinbo Corea located in Seoul’s Youngdeungpo neighborhood to criticize the DSC for keeping surveillance over the art organization Woorinara (Our Nation) during its performance in Japan.

According to the network’s representatives, an unidentified man took pictures of Woorinara members at Kansai International Airport in Japan on August 29 when they arrived for their performance for the ‘Kobe Joseon High School,’ a school for Korean residents in Japan.

Woorinara members confronted the man who was behaving suspiciously. While questioning him about his motives, they discovered a document outlining his task to secure the group’s itinerary and member profiles for an investigation of charges of violating the National Security Law. During a quarrel with Japanese police, the unidentified man revealed himself as a DSC agent. Minju Net members shared a video clip documenting the exchange with the press.

Lee Kang-sil, a representative of Jinbo Corea, said, “We have concerns that the DSC could be attempting to connect Woorinara and Korean residents in Japan” to an affair of espionage. Lee Jeong-hee, a lawmaker of the Democratic Labor Party, said, “According to the secret document and the man’s remarks about his association, he may be a DSC agent.” She is asking the DSC, the National Intelligence Service and the police for an explanation.

In response, a DSC official said, “There was no agent dispatched to Japan around August 29, and we are not familiar with the art organization Woorinara.” He added, “We will be filing a lawsuit against any persons who have circulated these false rumors of DSC involvement.”

Posted by NO Base Stories of Korea at 3:31 AM