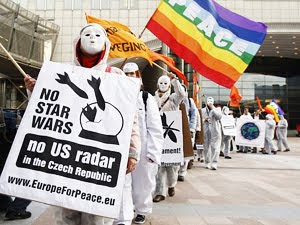 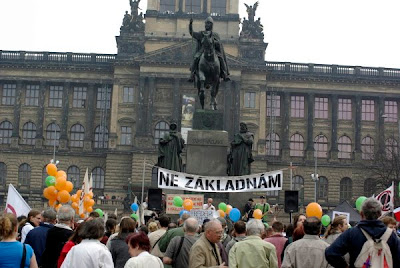 as you probably know, Barack Obama has suspended the plan to install the Missile Defense system in Centra Europe. This is a big victory for all of us who have been fighting against this terrible project!

Attached is our press release in english as well as a longer statement on this issue. Feel free to circulate it around.

big hugs and big thanks from Prague!


Statement of Jan Tamas on the suspension of
the Missile Defense project in Central Europe
Today is a big day that represents a new era in international relations; relations that were during the recent years poisoned with continuous armament and conflicts, with unilateral actions and disrespect for the will of ordinary people.

The 70% of Czechs are celebrating; it feels like a liberation day here in Prague. Today is a big victory for nonviolence.

At the same time we are very cautiously watching the reaction of powerful people, who for a long time have been proponents of the project and who probably have personal interest in the establishment of these new military bases in Central Europe.

We understand that the real threat today comes not from national states, but rather from economic and military-industry power groups that operate outside of any state control and could escalate international tensions any time.

We express our full support for president Obama in all his disarmament efforts, especially in the area of nuclear disarmament.

The struggle has been a very intense one and was carried forward by humanists and many other organizations around the world. We thank you all for all your support.

We hope that this victory will be a positive example for all the movements in Europe and around the world that are opposing the military bases and the militarist agenda in general.

This success is a good-luck wish to The World March for Peace and Non-violence that will begin in just a few days, on October 2 and that will unite people from around the world in the struggle for a better tomorrow.

See you all during the March!

President of the Humanist Party

Members of the Humanist movement welcome the decision of US president Barack Obama to cancel the missile defense enlargement previously planned for the Czech Republic and Poland.

“We have been active more than three years in the struggle to prevent this plan from materializing. We are very happy that finally the position of the US administration is in line with the will of majority of Czechs”, said Jan Tamas, spokesman of the Nonviolence movement referring to the two thirds of Czech citizens who disagreed with the project. “We will continue to support Barack Obama in his plan for nuclear disarmament, because clearly nuclear weapons are the most dangerous weapons of mass destruction that exist today.”

In the past three years members of the movement have held talks with members of the Czech Parliament, European Parliament, national parliaments of other European countries as well as the US Congress. They have also organized many demonstrations in different European cities as well as several international conferences debating this issue in Europe and the United States. Jan Tamas and Jan Bednar went on a 21 day hunger strike against the plan last June.

Overall, the anti-base movement is considered to be one of the biggest civic movements of Czech recent history.

There will be a big celebration of all the groups involved in the struggle today at 6:30 pm in Prague, Tyrsova 1. Members of the groups will have a champagne toast and give short statements for the media.

The Humanist movement is a worldwide movement of volunteers working together for a nonviolent change towards a more just world. It originated in the late 1960s in Argentina and since that time has spread across the world. Its Czech members have for the past three years nonviolently opposed the US missile defense base planned to be installed there. They gained wider recognition with the hunger strike of two of its members Jan Tamas and Jan Bednar in May 2008, the following sequential hunger strike with 300 participants, as well as several international conferences about the topics of US Missile Defense and disarmament.

Tyršova 1, Prague. Open to public every day from 9am to 5pm

StopNATO
“US victory to scrap AMD a big victory for the Czech people”
Czech News Agency
September 17, 2009
Czech left welcomes U.S. decision to give up radar base

Posted by NO Base Stories of Korea at 3:52 AM