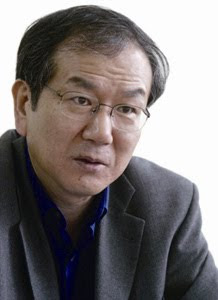 * Image Source: 'Hong Se-hwa', same as the article below

Yongsan again? It is still Yongsan, and it must continue to be Yongsan until the day comes. Why is it that I, that we, cannot ever escape from Yongsan?

Every night except Thursday at 7:00 p.m. a group of Catholic priests hold mass in memory of the victims at the scene where the Yongsan tragedy occurred. (On Thursdays, a Protestant worship service is held.) Perhaps because of the small number of participants, the evening wind feels harsh and chilly as it winds its way through the street by the Namildang Building where the tragedy took place. During my first visit, in what has been a longtime, I heard the roar of Father Moon Jung-hyun, who was presiding over the scene. If just a tenth, or even a hundredth, of the people who came to pay their respects to the late Cardinal Kim Sou-hwan, Roh Moo-hyun or Kim Dae-jung were in attendance here, he cried, the Yongsan problem could be solved. Father Moon then lamented over the fact that in spite of the many intellectuals, cultural figures and journalists talking about Yongsan in the newspapers and other public forums, few have actually come to visit the site.

Is it because it is inconvenient, as some have suggested, that people merely talk about Yongsan and do not visit? People may seek comfort, but humanity typically demands that we accept discomfort. Isn’t what makes us human the fact that we may be able to step away from humanity momentarily for the sake of comfort, but we cannot escape it forever? And those who say they do not attend the masses or services because they have no religion or a different religion are merely presenting convenient excuses. Their reasons stem from somewhere else. Is it not because we have gotten used to thinking of ourselves first, discussing the society that causes these incidents rather than sharing our neighbors’ pain and misfortune? Can I truly say that I am not assuaging my own wounded conscience when I talk about Yongsan, rather than looking unflinchingly at and offering comfort to the grisly wounds that still linger there?

It is also true, however, that a feeling of rage takes precedence over the spirit of sharing in our neighbors’ suffering. Think of Lee Sang-rim, owner of the Hangang Galbi restaurant. On Jan. 18, he ascended the Namildang tower together with his son, who was head of the protest committee against demolition. Lee, a 71-year-old grandfather was deemed an “urban terrorist,” and he burned to death in a suppression operation by a police commando unit not one day after he climbed the tower. Eight months have passed without even a funeral service. No one has taken responsibility. No one is apologizing. The prosecutors have refused to disclose some 3,000 pages of investigation records, claiming that the content is unrelated to the trial. When public authorities arbitrarily make determinations and decisions, this is called absolutism and it is the relic of a bygone era. Yet, a trial is underway now in which the surviving family members sit in the defendants’ box.

The “four major rivers” are not the only victims of the Lee Myung-bak administration’s tsunami. The knife-edge of illiberality is dancing in all areas of labor, education, human rights, media, welfare and civil society. Everyone that is not an ally is an adversary to be overcome through arrest and detention, dismissal and termination, hunting and litigation, monitoring and surveillance. Such is the situation that the targets even include Hope Institute Executive Director Park Won-soon, a creative man whose actions are far from subversive. Bridgeheads of democracy in all areas of society that have been built up with great effort are now collapsing, and it has become almost beyond people’s capacity to guard and preserve their sectors. This is likely another reason we see so few visiting Yongsan.

Yongsan is a self-portrait of our distorted society, the front lines on which we must fight those who oppose democracy and human rights. If we cannot maintain this line, we will be unable to advance in any area. Until the government apologizes, until the 3,000 pages of investigation records are revealed, until at least some measure of comfort is given to the souls of those who lost their lives so horribly and address their family members’ bitterness, we must continue to talk about Yongsan. More than that, we must visit Yongsan. Actions rather than words, bodies rather than mouths. If those of us who met last year in the plaza during the candlelight vigil demonstrations could meet again at Yongsan... What humbled the Lee Myung-bak administration last year was not words, but the power of our candlelight.

The views presented in this column are the writer’s own, and do not necessarily reflect those of The Hankyoreh.

© 2006 The Hankyoreh Media Company. All rights reserved.
Posted by NO Base Stories of Korea at 5:01 PM