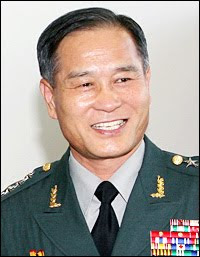 A successful transition of operational control (OPCON) of South Korean troops during wartime from the U.S. military to Korean commanders will serve as a barometer for the future strategic alliance between Seoul and Washington, the outgoing deputy commander of the ROK-U.S. Combined Forces Command (CFC) said.

Gen. Lee Sung-chool, 60, who also serves as head of the CFC's Ground Component Command, said any failure of the OPCON transfer would give the wrong signal to North Korea and destabilize the security of the Korean Peninsula.

Lee will retire next Monday, ending his 40-year-long service with the nation's military. Since assuming the post of chief director of strategic planning for the Joint Chiefs of Staff in December 2007, Lee has led works on overhauling the three-decade-old U.S.-led combined forces mechanism to a South Korean-led "joint defense system."

Both countries agreed to launch the new system on April 17, 2012, from when the two militaries are to run separate theater commands, with the U.S. military shifting to a naval- and air-centric support role.

"There are two possible kinds of failures regarding the OPCON transition," Lee said in an exclusive interview with The Korea Times, Tuesday. "One is that we shall take over OPCON when we're not fully prepared. The other is that we shall be prepared but the U.S. would not properly transfer the command authority."

Both cases could give a chance for North Korea to make a wrong decision to take provocative steps on the peninsula, the general stressed.

"The bottom line is that we should take over OPCON from the U.S. when we'll be fully prepared in a stable manner, not just being bound by the timetable," he said, advising the Seoul government managing the OPCON issue in a more careful and measured way in the coming years.

"South Korea is destined to achieve the tasks of 'survival' and 'prosperity,''' Lee noted. "In that context, the OPCON transfer is a matter of survival, while the free trade agreement with the United States, for example, is that of prosperity."

We should keep in mind that prosperity is possible only after survival, he said.

Following his assumption of command as Deputy CFC Commander, Lee has been recognized for spearheading a public diplomacy effort to secure extended public and parliamentary support for the alliance.

"Gen. Walter Sharp came here with a mission to transform the six-decade-old alliance mechanism into a new one, so he needed much help from the Korean side," Lee said. "I tried my best to understand their way of thinking and supported them, serving as a de facto mentor regarding Korean affairs. Simply, I asked Sharp to meet with as many Koreans as possible, listen to their opinions and persuade them if required."

Gen. Lee was proud of having worked for the military and deeply thanked his nation for giving him a chance to serve as a four-star general despite his "humble" background.

Born to a farmer in Bi-geum Island, Sinan County, South Jeolla Province, Lee was unable to enter advanced education due to financial constraints. But he learned himself and later passed the qualification exam for secondary education by working during the day and studying at night.

Before entering the Korea Military Academy in 1970, Lee worked as an official at a local prosecutor's office.

After being commissioned in 1974, Lee served in key assignments in both field units and policy-related offices.

Lee was awarded many medals and citations, including the Order of National Security Merit, Samil and Chonsu Medals, a U.S. Secretary of the Army Commendation and a ROK Presidential Commendation.

gallantjung@koreatimes.co.kr
Posted by NO Base Stories of Korea at 6:34 AM