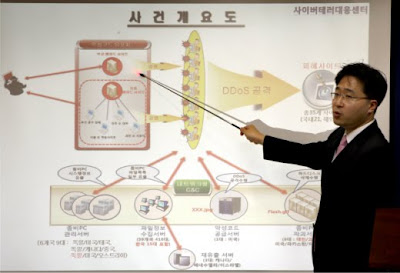 The government confirmed Sunday that the National Intelligence Service (NIS) will serve as a control tower for private, public, and military sectors in the event of a cyber crisis.

According to the government’s comprehensive measure relating to monitoring cyber security, when cyber security levels pass ‘normal’ and reach cautionary levels, the NIS is expected to create a countermeasure organization and take control of the situation, analyze it and issue a warning if necessary. Until now, the private sector’s Korean Communication Commission (KCC), the public sector’s NIS, and the military’s Defense Ministry have shouldered responsibility for cyber security in each sector. The distributed denial of service (DDOS) attack on July 7 had raised cyber security levels to ‘caution.’

The government has also decided that the KCC will have a role in managing public relations and eliminating zombie PCs. The Defense Ministry plans to integrate members from different units to form a single unit comprised of 500 military service members to deal with cyber affairs.

Meanwhile, concerns remain that the enforced power of the NIS relating to cyber security could mean increased surveillance over the private sector.

Posted by NO Base Stories of Korea at 4:05 AM