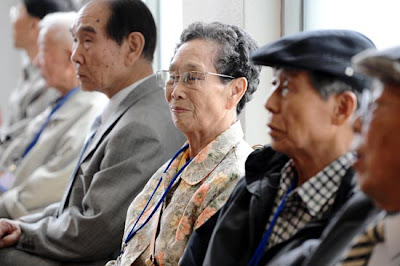 SOKCHO, South Korea, Sept. 26 (Yonhap) -- A group of elderly South Koreans departed for North Korea on Saturday to be briefly reunited with their long-lost relatives there, the first such event in nearly two years.

Ninety-six South Koreans, 30 of them too frail to walk alone and accompanied by one family member each, headed to the Mount Kumgang resort on the North's east coast by bus, through the heavily-fortified demilitarized zone.

"It's been almost sixty years. I am happy and also confused," Kim Un-seon, 86, said. He was set to meet his son and daughter-in-law from the North's Hwanghae Province for the first time since leaving his home at the onset of the Korean War in 1950.

The elderly gathered in this eastern seaside town just south of the border on Friday. Four others, initially selected in the 100-member list, were unable to come because of their frail health, according to the National Red Cross of South Korea which set up the reunions with its North Korean counterpart. More than three-quarters of the participants are 70 or older.

South Korean Red Cross President Yoo Chong-ha traveled to the North with the South Korean families, and a meeting with his North Korean counterpart, Jang Jae-on, is expected during the earlier segment of the event.

About 600,000 people in the South are believed to have family in the North from whom they have been separated since the 1950-53 war. Candidates were first selected through a computer lottery, with the final lists being drawn from applicants whose relatives were located, giving priority to immediate family members and the elderly.

The humanitarian event was arranged after North Korean leader Kim Jong-il agreed last month to resume the reunions in a meeting with Hyun Jeong-eun, chairwoman of South Korea's Hyundai Group, a major investor in the North. The North has since followed up with a series of other conciliatory moves, such as lifting restrictions on a South Korean-run industrial park on its soil.

Political tensions mounted after the conservative government of President Lee Myung-bak came to power in the South last year. Lee toughened up on the North's nuclear drive and suspended massive aid, while North Korea boycotted dialogue and suspended the family reunions. The mood further chilled after a North Korean soldier in the Mount Kumgang resort area shot and killed a South Korean tourist who had strayed into an off-limits military zone in July last year.

hkim@yna.co.kr
Posted by NO Base Stories of Korea at 2:28 PM