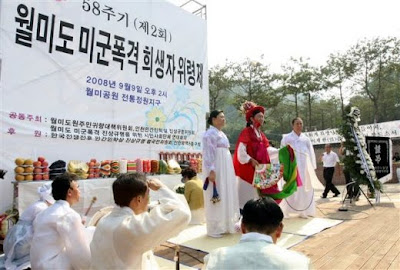 Wolmido island residents hold a memorial service at Wolmi Park for the victims who died as a result of U.S. Air Force bombing during the Korean War, Sept. 9, 2008.

Former residents of Wolmido island, located near Incheon City, read a letter to U.S. President Barack Obama during a memorial service for victims who were killed during the Incheon landing led by General MacArthur 59 years ago.

In the letter, they are asking Obama for South Korea and the U.S. to conduct a joint investigation and to offer proper compensation for the families’ relatives. The former Wolmido residents plan to deliver the letter to the U.S. embassy in Seoul on September 16.

The letter says, “We lost our family members due to U.S. bombing on September 10, five days ahead of the Incheon landing, and we were expelled from the island without being able to bury their corpses.” It also says, “We are writing this letter with the hope that President Obama will be able to address our heartbreak.”

At dawn on September 10, 1950, the U.S. Army started to bomb Wolmido island with 93 napalm bombs in an effort to annihilate the North Korean army staying on the island. Several hundred civilians were killed as a result of the five days of bombing.

South Korea’s Truth and Reconciliation Commission has confirmed facts surrounding this incident and is recommending that both South Korea and the U.S. government conduct a joint investigation in order to resolve the matter, however, both governments have not yet responded.

Please direct questions or comments to [englishhani@hani.co.kr]
© 2006 The Hankyoreh Media Company.
Posted by NO Base Stories of Korea at 6:36 AM