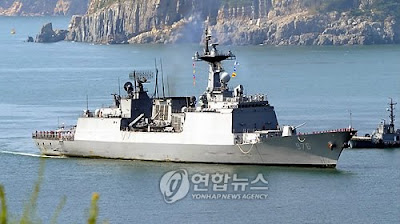 * Image Source: Same as the article below

SEOUL, Sept. 14 (Yonhap) -- South Korea's first naval unit to be deployed off the Somali coast rescued seven vessels and escorted 325 during its 186 days of anti-piracy voyage, the Navy said Monday.

The first 300 members of the Cheonghae unit, operating aboard a 4,500-ton destroyer, returned home over the weekend, having handed over their mission in the Gulf of Aden to a replacement group.

Deployed in April, the Munmu the Great destroyer was carrying South Korea's first naval unit to be deployed overseas for either a peacekeeping or multinational operation.
Posted by NO Base Stories of Korea at 3:43 AM