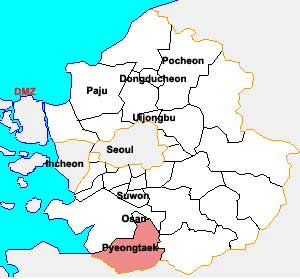 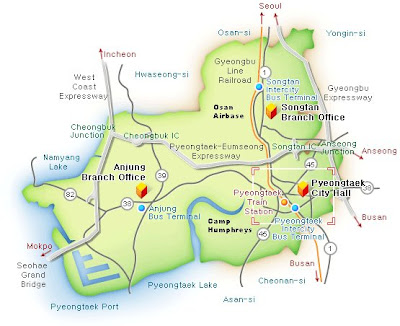 A broader joint air operations command of South Korean and U.S. Air Forces is being set up here in tandem with the planned transition of wartime operational control (OPCON) in 2012, a military source said Sunday.

The Hardened Theater of Air Control Center (HTACC), the Korea-U.S. combined air operations command led by a three-star American general at Osan Air Base, has been working to expand its roles and missions after being renamed the Korea Air and Space Operations Center (KAOC), the source said on condition of anonymity.

The Master Control and Reporting Center (MCRC), a computer system to monitor and track aircraft on a real-time basis, at the KAOC is also receiving upgrades, he said.

"KAOC will be developed further to serve as an integrated joint air force command of the two allies on the peninsula by 2012, effectively orchestrating all operations of the two air forces in the case of an emergency," the source said.

The U.S.-led Combined Forces Command (CFC) is to hand over almost all operations authority on the peninsula to South Korea's Joint Chiefs of Staff (JCS) in 2012 before being deactivated.

But the U.S. military will still lead air operations after the transformation to take advantage of its dominant aerial assets against North Korea in time of war.

Both air forces successfully tested KAOC during the Ulchi Freedom Guardian exercise in August, according to the source.

The command will manage and direct operations conducted both by South Korean forward and rear area air operations headquarters, he said.

"Work to build facilities of the new forward area command is underway in Osan," an Air Force official said. "In a bid to help boost interoperability, a liaison office from the rear area command may also be opened at the Osan base."

A U.S. military source expressed confidence in joint air operations by both commands, saying, "Each U.S. officer in KAOC has a Korean counterpart and all communications and briefings are delivered in both English and Korean. This close partnership is vital to the security of Korea."

How to map out a new command structure of the South Korean and U.S. Air Forces on the peninsula has been a key topic of the 2012 command rearrangement procedures, as the U.S. military pledged to shift its roles and missions to air- and naval-centric ones while reducing the number of ground troops.

In February, U.S. Forces Korea Commander Gen. Walter Sharp, who also serves as chief of the CFC, unveiled a plan to launch a U.S.-led combined theater air operations command in Osan by 2012.

As for criticism that a U.S. commander will still be in charge of joint air operations even after the 2012 transition, Gen. Lee Sang-eui, nomine for JCS chairman, said the authority to command and control joint air operations will, in fact, be in the hands of South Korea, given the JCS chief will eventually have the highest decision-making power for all wartime operations.