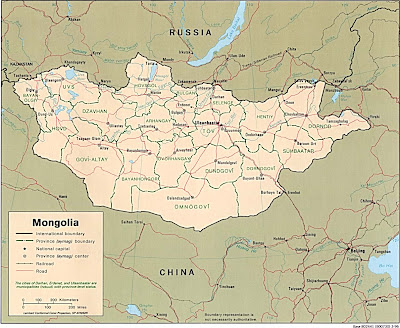 Speaking of Mongolia, sandwiched between America's two biggest rivals, Navy Admiral Timothy Keating, Commander, US Pacific Command recently told the media, "They’re in, of course, a strategically critical spot for us, with Russia to the north and China in the south. They have some marvelous natural resources upon which they intend to capitalize. So they’re a good partner of ours, they’re good friends, and we enjoy working closely with them."

Indeed the US is very interested in the resources that lie beneath the soil of Mongolia. They have the world's third largest deposits of uranium with virtually none of it currently being extracted. Coal and gold are also available in Mongolia and the multi-national mining industries are salivating at the chance to get at all of these deposits - and they want to keep competitors like Russia and China at arms length.

But even more important is the strategic value of Mongolia's location. It is the perfect military outpost for any nation trying to surround Russia and China as the US is today.

Since 9-11 happened in 2001 the US has expanded its interaction with Mongolia. Military advisers now routinely make their way to Mongolia and the US is helping to finance and outfit new military bases there and is working to have unlimited access to them.

In August of this year the sixth annual Khaan Quest 2009 multinational military exercises were held there, jointly run by the Mongolian Armed Forces and the US Pacific Command under the Global Peace Initiative program, at the Five Hills Training Camp, 60 km west of Ulaanbaatar. Over 700 military personnel from Mongolia, US, India, South Korea, and Cambodia took part in the war games.

The Global Peace Initiative is a program managed by the U.S. Department of State to supposedly train "peace keeping troops" around the world. In truth this program recruits nations like Mongolia to have the Pentagon train their military forces for deployments in Iraq and Afghanistan and gives the US a "legitimate" excuse to set up military operations at bases inside their country.

You can imagine that China and Russia are not thrilled to have the US military prowling around another country right on their border. Mongolia is just one more example of the current aggressive US plan to create more military outposts around the world - particularly in Central Asia.

Be prepared next to hear that NATO wants to set up "global partnership" relationships with Mongolia.
Posted by NO Base Stories of Korea at 4:41 AM