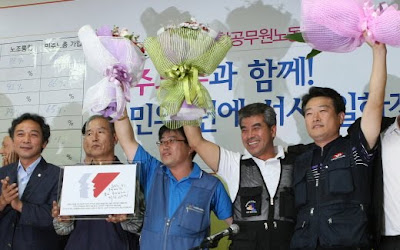 The presidents of the three unions held a press conference at KCTU’s office located in Seoul’s Yeongdeungpo neighborhood at 9:00 p.m. on the same day and said, “The rate of voter participation was 75.8 percent or 82,911 members out of 109,433.” The presidents also said, “In addition, 89.6 percent of the participants voted in favor of the merger and 68.4 percent voted in favor of joining KCTU.” The vote began on Sept. 21.

Son Young-tae, the president of KGEU said, “The merging of these three unions is a response to the suppression unions have experience from the Lee Myung-bak administration.” He added, “The union will counter the Lee administration’s suppression with the strength gained through the merger.” The three unions are expected to report to the Labor Ministry as one union by the end of the year.

The new union’s total membership is projected to be around 110,000, since KEGU has 48,055 members, KDGEU 53,399, and CGEU 7,979 members currently registered. The merged union would rank third in the KCTU, following the Korean Metal Workers’ Union with 147,000 members and the Public Union with 142,000 members. With the addition of KGEU and CGEU members, the KCTU will have an additional 61,378 more members. KDGEU is already a branch union of the KCTU. As a result of this increase in membership, the KCTU could become the largest umbrella union in South Korea.


Please direct questions or comments to [englishhani@hani.co.kr]
© 2006 The Hankyoreh Media Company.
Posted by NO Base Stories of Korea at 5:12 PM