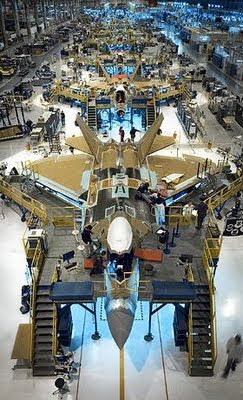 By now you've likely seen the article explaining how the "United States expanded its role as the world’s leading weapons supplier, increasing its share to more than two-thirds of all foreign armaments deals."

The New York Times reported, "The United States signed weapons agreements valued at $37.8 billion in 2008, or 68.4 percent of all business in the global arms bazaar, up significantly from American sales of $25.4 billion the year before.

"Italy was a distant second, with $3.7 billion in worldwide weapons sales in 2008, while Russia was third with $3.5 billion in arms sales last year — down considerably from the $10.8 billion in weapons deals signed by Moscow in 2007."

Any doubt that "security export" is going to be our role in the global economy in coming years? We won't make clothes, shoes, cars, steel, etc.....we are going to build weapons, invade and occupy other countries, and keep our collective boot on the necks of the people of the world so that we can extract their oil, natural gas, precious mineral resources, their water, and their cheap labor. The US has become the military arm of corporate globalization.

In recent days I've seen several news articles from places like Colorado and New Mexico heralding the "success" of the military takeover of public schools. This is all part of "security export" strategy as we must now funnel working class kids, who will have few other job prospects, into the military. The economic draft is working quite well.....but the public could care less because these are poor and working class kids and they don't count.

This of course indicates that we are not going to be able to stop the US proclivity toward war making unless and until the peace movement and the general public begins to understand and talk more about this new direction for our nation - security export.

What does weapons production and the need for endless war say about the soul of our nation? What does it say about us as a people that we have to continue killing in order to provide jobs so workers can feed their families? How long are we willing to hand over our children to this endless war machine? How can we expect to have peaceful relations with the world as we continue to militarize our culture and foist weapons and conflict on the rest of the world?

What is the peace movement saying about an alternative vision to this security export plan? What is our program for job creation? Why are we not leading on this?
Posted by NO Base Stories of Korea at 6:32 AM