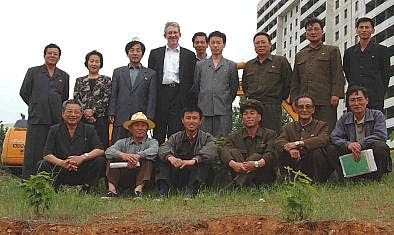 While the world is primarily preoccupied with the nuclear issue with North Korea and thinks that North Korea is sealed off from the outside world, there are those who argue that North Korea presents good investment and joint venture opportunities. A British businessman residing in Pyongyang and operating joint ventures has this to say:

The DPRK (North Korea) represents one of the last “green field” economies in the world with exceptional investment opportunities. As such it provides an unparalleled opportunity for business professionals who know and understand the risks, the people and the country. As estate agents are fond of saying it is a case of “location, location, location.”
[See more [also copied below] The photo shows a groundbreaking ceremony of a joint venture in North Korea.]

* Analysis by: GLG Expert Contributor
* Analysis of: Goldman Sachs Has a Different View of Korean Unification
* Published at: online.wsj.com

The DPRK (North Korea) represents one of the last “green field” economies in the world with exceptional investment opportunities.
As such it provides an unparalleled opportunity for business professionals who know and understand the risks, the people and the country.
As estate agents are fond of saying it is a case of “location, location, location”.

My colleagues and I are directors of a number of businesses (Phoenix Commercial Ventures Ltd www.pcvltd.com) that have been based in the DPRK (aka North Korea) for a number of years.
Goldman Sachs is correct to highlight the upside of business opportunities with the DPRK.
The DPRK (North Korea) represents one of the last “green field” economies in the world with exceptional investment opportunities. As such it provides an unparalleled opportunity for business professionals who know and understand the risks, the people and the country.
As estate agents are fond of saying, it is a case of “location, location, location”.

The DPRK (North Korea) physically borders Russia, China and ROK; as such it is in a prime location in this most important of trade routes. Additionally, its location in Asia Pacific gives it access to one of the world’s wealthiest and most vibrant regions.

The DPRK has abundant mineral resources including; coal, gold, magnesium, nickel, copper, graphite, nephelite, zinc etc. The total value of which is estimated at being around $2.5 Trillion (IHT 21 Dec 2007).
The DPRK has a well educated (99-100% literacy), intelligent, hard working population whose wage rates are highly competitive.
The DPRK has a forward looking environmental policy that offers green investors opportunities to generate environmentally friendly power for supply locally and export elsewhere.

The recent improvements in geopolitical issues demonstrates that the time is right, in terms of historical context, for progress to be made with regard to the DPRK entering the world financial community and to benefit from world trade.

It is not difficult to set up shop, if you approach the DPRK with a well thought through serious business proposal/well researched business plan and are a professional with reputable/professional local contacts.
It should be emphasised that businesses in the DPRK are no more fond of having their time wasted than businesses anywhere else in the world, local businesses having had their time wasted tend to prefer to deal with professionals that they trust.
When setting up a business within the DPRK remember that you cannot manage solely by email and need people on the ground, as is the case with Phoenix Commercial Ventures. Organisations that do not have people on the ground in DPRK will fail.
One of the major challenges facing a newcomer to the local market is a very practical one – how to find a way to balance the need for pre-start-up feasibility studies requiring possibly large amounts of information from the local Korean partner, against the need to demonstrate to the local authorities that the investor is serious.
There have been many cases over the years of potential foreign investors making promises they cannot fulfil, and the Koreans have consequently become somewhat sceptical. It is therefore essential to promise only what you know you can deliver, and to deliver within the timeframe agreed.
The DPRK Government is actively encouraging foreign investment in areas such as mining, energy, agriculture and IT.
Investors in the DPRK are accorded generous tax concessions:

- A reduced rate of tax of 10% (standard rate - 25%)
- An additional tax exemption - whereby the investor is fully exempt from paying tax from the year of investment for 3 years, and 50% exempt for the subsequent 2 years
- Any tax paid will be returned, if a subsequent investment is made
The DPRK is also undertaking small experiments with free market economy principles that would have been unthinkable a couple of years ago. There are now 24-hour stores operating in Pyongyang, several places providing computer access and a series of adverts on the TV.
Kim Yong-sul, DPRK Vice Minister for Trade, is quoted as saying at a Pyongyang meeting of overseas ethnic Korean businessmen October 25 2004:

“In the past, we only allowed foreign companies entry into specialized economic zones, but now, we will allow them to set up in other places around the DPRK."

There are a number of misconceptions harboured by some in the West about doing business in the DPRK.
The one that we most frequently encounter is that people do not believe that it is possible, as a Westerner, to set up and run a company in the DPRK.
This is patently untrue, the DPRK allows Western companies to set up and run joint ventures (JV’s) with a majority shareholding, with local partners and to remit profits; the government encourages foreign investment.
One of our (Phoenix Commercial Ventures Ltd) aims is to demystify the business environment, demonstrate that people can make successful and ethical joint ventures in the DPRK that provide a decent return, employ local people, engage with local professionals; thereby encouraging others of good repute to come and do the same.
Another misconception is that communications from outside the DPRK with people working in the DPRK are impossible. This is untrue. I can call via phone and email my colleagues directly from London.
Starting and running a JV in the DPRK requires the same approach as it would in any other country – it is the fact that it is a JV that is important, not that it is in the DPRK.
That means you have to have the good judgement to size up and choose a good partner with whom you are going to work well together, but then you have to do just that – work well together, with emphasis on each of those words.
If you start a joint venture where you are always suspicious of the joint venture partner, then you shouldn’t have started the JV in the first place, it will never succeed – that is exactly the same in any country.
It is absolutely essential to have resident foreign management, a joint venture cannot be run remotely from abroad. The quality of, and relationship with, the local staff is essential; as is that of the foreign management. The aim of the JV should be to bond the personnel into an independent unit, who are striving for the success of the JV, and to remove entirely any idea of ‘our side’ and ‘their side’ within the JV.

Goldman Sachs are not alone in viewing the future positively. In 2004 Barclays Capital Research issued an upbeat report about the DPRK:
“The North Korean economy does not seem about to collapse” (contrary to what many might think).
- As time goes by we are likely to see “the development of an uneasy coexistence with the US”.
- There are some signs of improvement in the North Korea's economy, thanks to recent reforms. The growth will remain very slow, but the regime has built in “coping mechanisms” that will prevent collapse.
- “A slow income growth could be supportive of political stability, because it would make it easier for the regime to control popular expectations.”
- What the Chinese would call peaceful evolution is possible:
“Political and economic stability would, over the longer term, see the completion of the transition from a planned to a market economy and greater integration of North Korea into the global economy. This in turn, could support a long-term normalisation of North Korea's diplomatic relations with the external world.”

When we were exhibiting at the Pyongyang Spring International Trade Fair in May 2008, our CEO was at our stand and was approached by a young Korean lad who in perfect English said “Excuse me, am I disturbing you?”
It turned out that he wanted his photo taken.
The above may not seem much of an anecdote to those who have little understanding of the DPRK. However, those who do will realise the significance of that.
We are also attending the current four day international trade fair which opened this Monday in Pyongyang, with 120 companies from the DPRK and 14 other economies taking part.
The DPRK offers an unparalleled opportunity for business professionals who know and understand the risks, the people and the country.
Analyses are solely the work of the authors and have not been edited or endorsed by GLG.

Contributed by a Member of the GLG Accounting & Financial Analysis Councils

Posted by NO Base Stories of Korea at 2:40 AM