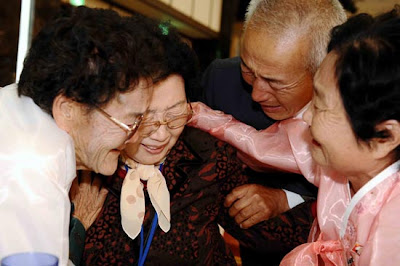 Hundreds of Koreans Saturday had tearful reunions with relatives they had not seen for almost 60 years, as a South-North humanitarian program resumed after a two-year hiatus.

Sobbing relatives hugged each other tight, mostly speechless with emotion as the reunions at the North's Mt. Geumgang resort near the inter-Korean border were shown on a South Korean TV, according to AFP.

Tears that had been held back for almost 60 years streamed down the face of Kim Hye-kyong, 83, who met her daughter for the first time since they were separated during the Korean war, AFP said.

"I have been always feeling guilty since I left you when you were only three years old," Hye-kyong was quoted as telling her daughter.

"Don't worry mother. I am well off here," the daughter replied calmly, holding her mother's hands in her palms.

Hye-kyong brought her daughter a traditional Korean costume called hanbok that she had made herself.

Noh Sun-ho, a 50-year-old woman, was reunited with her brother, Noh Sung-ho, whose fishing boat and 11 other colleagues were captured by a North Korean patrol boat near the inter-Korean border in 1987.

Tearfully, they hugged tight. "I've been missing you so much," Sun-ho said. "After coming to the North, I've been living quite well. I got a decent job in Pyongyang. Those who knew me in the South wouldn't believe that I was even sent to a college (by the North Korean government)," the brother said.

Lee Kwe-suk, 79, was conscripted into the South Korean army during the Korean War and listed as killed in action before he was recently found alive in the North.

"I failed to be a filial son for my parents but I always miss them so much," Kwe-suk said after he met a South Korean brother who told him that their parents have already passed away.

"I'm so overwhelmed by emotions. I cannot even shed tears," Kwe-suk said.

Earlier on Saturday, a group of 97 elderly South Koreans, including eight in their 90s and 52 octogenarians, drove through the heavily fortified inter-Korean border toward the Mt. Geumgang resort on the North's east coast.

A total of 100 South Koreans were chosen for the reunion program but three pulled out at the last moment for health reasons. The reunion program had been suspended for two years as ties between Pyongyang and Seoul's conservative government deteriorated. The communist state has agreed to resume them as part of a series of recent peace overtures.
For three days starting Saturday afternoon, the 97 South Koreans will be reunited with their 240 relatives in the North who were found to be still alive and able to travel.

In the second stage of the event, 99 North Koreans will be reunited with 449 relatives living in the South from Sept. 29 through Oct. 1.
Posted by NO Base Stories of Korea at 4:49 PM