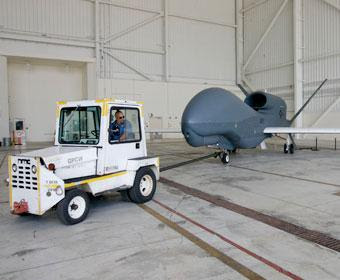 Our local newspaper reported yesterday that the Navy has flown an Unmanned Aerial Vehicle (UAV) into our community for a week-long visit. This is nothing more than a public relations effort to promote the idea that the Brunswick (Maine) Naval Air Station, set for closure in 2011, could be turned into an "Unmanned Aerial Vehicle Test Center."

The Times Record article extensively quoted me and another local peace activist and ended with a revealing statement from Maine's commissioner of economic and community development, a guy by the name of John Richardson, who is planning to run for governor in our next statewide election. Just days ago one of our key peace movement leaders in the state reported that she had talked with Mr. Richardson and he said there was no plan to use the closing base as a UAV test center. Politicians do deceive.

In the news article Richardson says, "There are many adaptive uses of UAV's that could be very helpful to the nation and then to the world. I wouldn't cast out of hand UAV research or testing, because of the potential benefits to the nation in the areas of search and rescue, air and water quality, homeland security and even forest fire prevention."

How nice....how sweet. So that is what the US has been doing with our UAV's in Afghanistan and Pakistan....checking on water quality?

In the interview Richardson, a Democrat and former speaker of Maine's House of Representatives, noted that the Global Hawk drone that visited Brunswick is a surveillance craft, "which is different than the drones that drop bombs."

We know that the fledgling aerospace industry in Maine is drooling at the prospects of using the closing Naval Air Station as a drone test center. They have formed a committee to push this project and have developed a relationship with the University of Maine to begin offering an "aerospace industry" class at the institution this fall. In one video of the aerospace committee that I recently saw they were excited about the fact that the Pentagon is moving from expensive fighter aircraft to cheaper UAV's for war fighting. The aerospace committee was predicting that this was a "growth market" and that Maine needs to get in on the ground floor. Someone is going to make some big money they were saying as they rubbed their hands together.

In the article I was quoted talking about the UMASS-Amherst Economics Department study that points out that military spending is capital intensive while every other kind of job creation is labor intensive. Since the base closure is causing much distress about job loss in our community it was important to get that information into the news article. Fortunate for us the newspaper ran the story at the top of the mast on the front page.

It will now be crucial that the peace movement in Maine respond resoundingly to this trial balloon that was floated by the "visit" of this UAV to Brunswick. We are suggesting that Mainers call the town of Brunswick at 725-6659 to lodge your disagreement with the idea of turning the Naval Air Station into a UAV Flight Test Center. Since the state is at some level going to pay for redevelopment of the base this is a legitimate statewide issue.

Because the UAV market is expected to be so huge globally we are beginning to hear from activists in other places who are facing this same issue. The Campaign for Nuclear Disarmament in Wales is reporting that a UAV development operation is going to be set up in their country. And interestingly enough, it is being similarly sold as a "civilian" use.

Funny how the development and testing of these killer drones is always just for civil use........
Posted by NO Base Stories of Korea at 2:17 PM