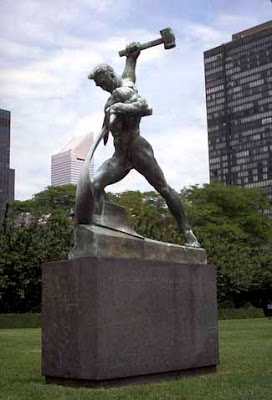 I had a wonderful day yesterday at the Common Ground Fair just outside of Unity, Maine. The weather was a perfect fall day, sunny and cool, and the crowds were enormous - likely in the tens of thousands.

I worked for several hours at the Veterans for Peace table gathering signatures on the petition opposing the plan to create an Unmanned Aerial Vehicle (UAV) flight test center (the drone zone the local paper calls it) in nearby Brunswick. Under another of the huge tents the Peace Action Maine table was doing the same thing so between us we reached many people on the topic.

At 2:00 pm about 15 fellow peace activists from around the state gathered by one of the fair entrances where we dressed ourselves in black capes and put on white masks. We hung big black sandwich-board signs over our shoulders that in white letters raised the issues of endless war in Iraq and Afghanistan. Two of us with drums, one in front and the other near the rear, pounded a slow and steady heartbeat as we walked throughout the huge fairgrounds for more than 30 minutes in a solemn single-file. The crowds would stop what they were doing and watch us though many more than we would have expected at such a "progressive" fair stood with blank stares on their faces. Of course we received many positive messages too but following our second time around the fair, after we had removed our costumes, all those participating agreed that many people in the public are in emotional shutdown.

It reminds me of the book called Art of Loving by Eric Fromm. He told the story about pre-Nazi Germany where psychology students went out onto the streets and queried the public about their reasons for virtually ignoring the warning signs of a coming fascism. The students found that the public did not want to think about it nor did they wish to act.

In his book The Anatomy of Human Destructiveness, Fromm wrote:

To have faith means to dare, to think the unthinkable, yet to act within the limits of the realistically possible; it is the paradoxical hope to expect the Messiah every day, yet not to lose heart when he has not come at the appointed hour. This hope is not passive and it is not patient; on the contrary, it is impatient and active, looking for every possibility of action within the realm of real possibilities. Least of all it is passive as far as the growth and liberation of one's own person are concerned.... The situation of mankind is too serious to permit us to listen to the demagogues - least of all demagogues who are attracted to destruction - or even to the leaders who use only their brains and whose hearts have hardened. Critical and radical thought will only bear fruit when it is blended with the most precious quality man is endowed with - the love of life.

At about 4:00 pm yesterday Maine Veterans for Peace president Dud Hendrick and I did a one-hour talk with about 25 people under one of the small workshop tents provided by the fair. We spoke about the growing US military empire and told some stories about how US bases in places like Diego Garcia, Marshall Islands, Greenland, and South Korea have stolen land from the peoples of those countries. We asked why the American people are not more engaged about the many thefts that result when one nation builds an empire?

My bottom line message was conversion, beating the swords into plowshares, and the need for all of us to find ways in our everyday lives to enflesh, to give life, to that demand if we hope to successfully bring home the empire.