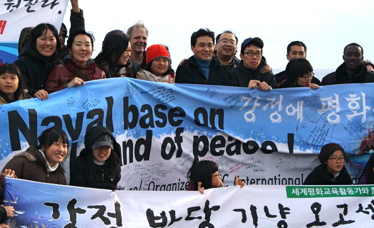 Last week, we heard reports that 700 police from the South Korean mainland arrived at Jeju Harbor with buses and trucks bearing three large water cannons. The villagers have been vigilantly waiting for the police to strike.

They did the morning of August 24th. Retired U.S. Army Colonel Ann Wright wrote to us from Gangjeong village, “The sirens are blaring for citizens to come to the main gate of the Naval Base where construction is about to begin in an area that will destroy pristine lava fields and endanger marine life. The siren sounds like a tsunami siren in Hawaii signaling an emergency. And that is what it is.”

At 2 pm that day, Gangjeong Village Mayor Kang Dong-kyun approached military contractors who started the operation of a 250-ton crane that had been smuggled into the village in the middle of the night years ago. In asking that the illegal crane be dismantled and removed, the Mayor was forcefully taken into a police van along with a villager, Mr. Kim Jong-Hwan, and other civil society activists. For 10 hard and long hours, 100 villagers and peace activists used their bodies and cars to prevent the police from taking away the Mayor and others. While two activists have been released, the Mayor, Mr. Kim, Dongwan and Father Moon are still detained.

The villagers at Gangjeong know that orders have been sent from the top. Their resistance must be dealt with once and for all.

Why now? Because we’re starting to win the battle of public opinion. In one week, The New York Times published an Op Ed and the International Herald Tribune published another, both supporting the peaceful four-year resistance of the villagers with facts showing that this naval base would destroy unique environments, provoke China by surrounding it with a US anti-ballistic system, but would be incapable of protecting South Korea from North Korea.

One was by Gloria Steinem, a women’s movement organizer and peace activist. The other was by Christine Ahn of the Korea Policy Institute. Their factual pleas have set off more voices, including an Op Ed in the conservative-leaning Korea Times entitled, “Save Jeju Island – Island of Peace,” and an Open Letter from South Korean opposition leader Chung Dong-young, who not only opposed the naval base but once it is defeated, pledged to make its site into a peace park.

And with more voices has come greater coverage, from a feature article in The New York Times to CNN and Al-Jazeera’s coverage of recent protests.

As the world learns more and more about the danger to its treasure of global environment and culture, Jeju Island, and also more about the heroic efforts by ordinary farmers, fishermen, the legendary women sea divers and children to preserve their home and way of life, all are inspired and emboldened to believe that the side of peace, the environment and democracy does have a chance of prevailing.

But with more visibility comes fear and greater repression for those who are accustomed to dictating from above. That’s what we are now witnessing as hundreds of police join forces with the 1,000 already on Jeju.

In order to stay one step ahead, we need the support of friends far away, just as the military has friends in the Pentagon.

All of us—the nearly 5,000 people from 50 countries who have signed the petition to President Lee urging him to stop the naval base – are building global awareness of the danger to our global natural and cultural heritage on Jeju Island.

This takes regularly communicating with the world on what is happening in Gangjeong village, sowing seeds of peace in the media and among allies in the peace, environmental, human rights and women’s rights communities, and regularly updating the www.savejejuisland.org website with bilingual and multi-lingual bulletins.

We have an urgent appeal to all of you to join us in our effort to Save Jeju Island.

Please go to this website to get more information on how you can act now:
http://savejejuisland.org/Save_Jeju_Island/Get_Involved.html

Just as no human being is an island, Jeju belongs to us all.