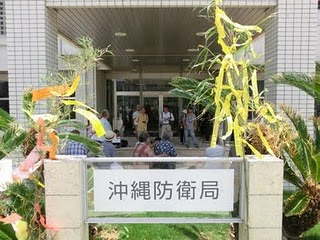 Its July reports describe efforts by the Citizens’ Network for Biodiversity in Okinawa (Okinawa BD) to obtain answers from the Okinawan Defense Bureau (the Japan Defense Bureau's branch in Okinawa) regarding U.S. military plans for training accident-prone military Osprey aircraft in biodiverse Yanbaru Forest. The Citizens’ Network for Biodiversity in Okinawa demanded a halt to the construction of helipads which the U.S. wants to locate in one of the most well-preserved areas of the forest, a habitat for numerous endangered species unique to northern Okinawa.

Okinawa Outreach also provided updates to the Okinawan Defense Bureau's November 2008 legal action against 15 residents of the Takae community (including a child), who, since July 2007, had been conducting a peaceful sit-in protest against the helipad construction on the prefectural road near the construction sites. Many consider this frivolous litigation, a SLAPP (strategic lawsuit against public participation) action, intended to intimidate and silence critics. The next hearing is scheduled for the end of August:

Posted by NO Base Stories of Korea at 4:21 AM