[famoksaiyanfriends] AGUPA'!! SOUL SUNDAY SCHOOL :
Power to the People of the Pacific!! Imperialism & Resistance in the Pacific Islands

SOUL and Famoksaiyan invite you to a Sunday School on the fight for survival and self-determination in the Pacific Islands. Please join us for a presentation & discussion about the legacy of US imperialism in the region and emerging movements to resist militarization. 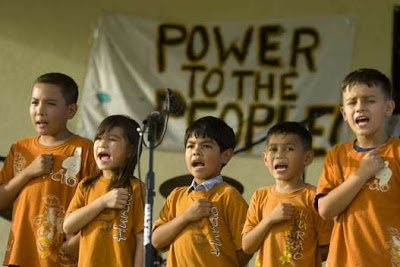 *Photo: We Are Guahan's Realize Our Destiny rally, October 1st 2010
by Masako Watanabe/Pacific Daily News
We will be joined by anti-militarization organizers who work in the Pacific and locally, against empire at home and abroad, including Moñeka de Oro from We Are Guåhan.

A current site of struggle in the fight against US military domination, the small Pacific island of Guåhan/Guam is currently targeted for a US military base expansion that threatens widespread displacement and destruction. The US military already directly controls over one-third of Guåhan's territory and wants even more, to strengthen its ability to wage existing wars and threaten new ones. We Are Guåhan is an island-based organization that works to educate residents about the impending military buildup, and organizes them in defense of their land and resources. They have been a leading popular force against militarization, and have mobilized thousands of people to take action to protect their island.

More on We Are Guahan here & here.

Saturday, October 2, 2010
Photos Fwd: [famoksaiyanfriends][Guam] Realizing Our Destiny
[괌] 우리의 운명을 실현하자
Posted by NO Base Stories of Korea at 12:37 AM