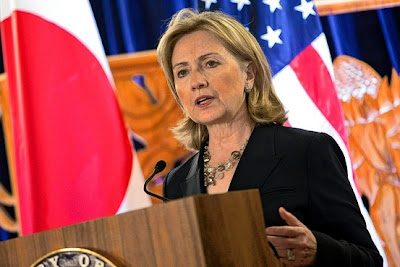 HONOLULU—Secretary of State Hillary Clinton encouraged greater U.S.-China cooperation in Asia, even as she stressed that the U.S. will increase its effort to remain a military and economic power in the region.

Mrs. Clinton, embarking on a seven-nation tour of the Asia-Pacific region, said the Obama administration is committed to defining events regionally and safeguarding the defenses of its allies, such as Japan, South Korea and Singapore.

"Now, there are some who say that this long legacy of American leadership in the Asia-Pacific region is coming to a close. That we are not here to stay. I say, look at our record. It tells a different story," Mrs. Clinton said Thursday in Hawaii.

Still, Mrs. Clinton said the U.S.'s presence in Asia doesn't seek to isolate China nor does it need to turn into a zero-sum game for competing influence.

Rather, she said Washington and Beijing stood to benefit from cooperation on everything from combating global warming to nuclear proliferation.

"To those who still believe that the U.S. is bent on containing China, I would simply point out that since the opening of diplomatic relations between our two countries, China has experienced breathtaking growth and development," Mrs. Clinton said, adding, "We look forward to working closely with China, both bilaterally and through key institutions."

Mrs. Clinton travels to Asia amid heightened tensions among China, the U.S. and Washington's allies on a range of economic and security issues.

On Wednesday, the U.S.'s top she expressed concerns that Beijing might use its monopoly over rare-earth minerals as a political weapon.

She called for America's partners to find alternative sources of supply.

The U.S. and China have also jostled in recent months over issues ranging from the value of the yuan to territorial disputes in the South China Sea.

In a bid to smooth ties, Mrs. Clinton will visit China's Hainan Island on Saturday to meet with State Councilor Dai Bingguo.

Some analysts have warned that Mrs. Clinton's last-minute trip to Hainan could appear to be the U.S. acquiescing in the face of Chinese belligerence. Hainan is particularly sensitive to Americans, as Beijing grounded a U.S. EP-3 surveillance plane there in 2001 and held and interrogated its crew for 10 days before receiving a letter of apology from the U.S.

Mrs. Clinton said the U.S.-China relationship was too central to regional security for Washington not to remain continuously engaged with Beijing. On Wednesday, she said she will use her meeting with Mr. Dai to help plan Chinese President Hu Jintao's visit to Washington early next year.

"We have a long list of issues to discuss," Mrs. Clinton said.

She said she has been heartened by signs China is willing to open up the trade of rare-earth minerals and settle disputes through multilateral institutions.

On Saturday in Vietnam, Mrs. Clinton will be the first U.S. secretary of state to attend a gathering of the East Asia Summit. The event includes the 10 members of the Association of Southeast Asian Nations, plus China, Japan and other Asian nations.

Mrs. Clinton said in her speech that she is using her tour of the Asia-Pacific to showcase Washington's commitment to remaining an active player. She will also visit Cambodia, Malaysia, Australia, New Zealand and Papua New Guinea.

"Everywhere we go, we will advance one overarching set of goals: to sustain and strengthen America's leadership in the Asia-Pacific region and to improve security, heighten prosperity and promote our values," Mrs. Clinton said.

The issue of China's dominance over rare-earth metals is a potential flashpoint for the trip.

China is estimated to supply about 97% of the global demand for these metals, which are essential for the production of computers and other electronic products.

Tensions between China and Japan have increased in recent months, fueled by a dispute over islands jointly claimed by the two Asian nations. In July, Beijing announced a drastic curtailment of its export quotas for these minerals, as well as a crackdown on smuggling, which began to be felt in subsequent months. China says the limits reflect its growing environmental awareness, are perfectly legal and won't be used as a policy tool.

The moves nevertheless raised fears that China was seeking to pressure Japan and other industrial powers.

Mrs. Clinton stressed following a meeting with her Japanese counterpart in Hawaii that recent Chinese restrictions on sales of the important commercial inputs must serve as a "wake-up call" for the U.S. and its allies to diversify their sourcing.

"Because of the importance of these rare-earth minerals, I think both the minister and I are aware that our countries and others will have to look for additional sources of supply," Mrs. Clinton said at a joint news conference with Japanese Foreign Minister Seiji Maehara.

In Beijing Wednesday, China's Foreign Ministry said it wouldn't use its dominance in rare-earth minerals as a "bargaining tool" with competing nations. Mrs. Clinton said she would seek to clarify this position during her scheduled bilateral meeting with Mr. Dai.

"I would welcome any clarification of their policy and hope that it means trade and commerce around these important materials will continue unabated and without any interference," Mrs. Clinton said.

Write to Jay Solomon at jay.solomon@wsj.com

Saturday, October 23, 2010
[국문 번역] Text Fwd: Clinton and the colonial paradigm
클린턴과 식민지 패러다임
Posted by NO Base Stories of Korea at 7:35 AM