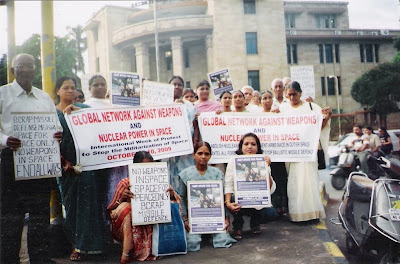 Having been denied permission to organize an International conference on Achieving a Nuclear and Missile Defence Free Asia on 9-10,October 2010 at Nagpur, India, by the Govt of India a National Conference on the same theme was held at the same venue and dates.Vice Admiral Vishnu Bhagwat, former Naval chief of India and Bruce Gagnon, Co-ordinator Global Network attended. More than 225 delegates from the States of Andhrapradesh, Madhypradesh, Chattisgarh, Maharashtra, Orissa, New Delhi have participated nincludent more than students.

On 9th October the inaugural session was held and Admiral Vishnu Bhagwat made the inaugural address and Bruce Gagnon greeted the Conference.

On 10th the discussions on Abolition of Nuclear Weapons, prevention of An Arms Race in the Outer Space, the concept of Asian Union and other issues were discussed. At the beginning of the discussion a Question and Answere session for 30 mts was held with Mr.J ayantha Dhanapala, former UN Under Secretary General from Sri lanka was held through Skype. Admiramal Bhagwat and Bruce hae extensivel highlighted the danger of Weaponistion of space.
A note worth feature was that many girl students and women intellectuals played a great role in the discussions and some of the peace activists from other states who attended the Conference were surprised at the dynamism with which the youth strongly articulated their views. This was noticed by Admiral Vishnu Bhagwat and Bruce Gagnon.

At the end a Nagpur Declaration was adopted.

On 11th night myself and Bruce left to Bhopal, Agra, Jammu and Srinagar for a lecture tour.

On 12 Bruce Addressed a large gathering of Acdemicians and students at Bhopal in the Bhansal College of Technology and National Institute of Technology. At each of the meetings more than 200 staff and students were present. A retired Colonel Mr.N.P Dixit has taken the responisibility for organising the meetings assisted by Mr.Vivek Dhawan, CEO of Smrit Netcome Private Limited. In the evening Hindustan Times a daily news paper had an exclusive interview with Bruce.

In 13-14 October we were at Agra the place of Taj mahal. After seeing the beauty and grandeur of Taj mahal we met a group of Doctors of Indian Doctors for Peace & Development affiliated IPPNW and discussed various issues. After Bruce spoke about the danger of weaponistion of space, they have expressed that for the first time they are hearing about the danger from Space and they will be cooperating with the G.N in future.We left to Jammu on the evening of 14th.

On 15 Oct under the banner of Global Network a well attended public meeting was held at Jammu in the State of Jammu and Kashmir. This was a unique meeting attended by high intellectuals including scientists, retired and serving Govt Officilas, academicians, retired Military Officers, Trade Union leaders and others. It was addressed by Bruce, myself and Senior Advocate M.A. Goni former Advocate General of Jammu and Kashmir State. On 16th we visited the house of Adv. Goni and discussed with him for a couple of hours on several international issues and the situation in J&K. We left to Srinagar on 17th and during our stay there till 19th we couldnt address any meetings because of the disturbances there and students are unable to attend the Colleges. However we held a brief of disucussion with the Principal of Government Womens College, Srinagar and got an assurance that she will assist us in spreading our movement amongst the students.This college has got more than 7,000 girl students.We visited the Office of the Rising Kashmir a daily English newspaper and discussed with the senior journalists on various issues.

At Jammu Mr. Ashwani Pradhan, General Secretary of All India Peace & Solidarity Organisation of J&K State, leader of the Bank Employees and a member of the Global Network did a splendid job in organizing the meeting and also for our stay. At Srinagar we have been taken care by Mr. Abdul Ghani Hafiz and Mr.Abdul Rehamn Tukroo (An Ex. Member of the Legislative Council of J&K.) Both are very progressive individuals.

The experience of Bruce has already been put in his Blog ..

Colonel Dixit at Bhopal wants to host the G.N Annual Conference in 2012 at Bhopal. Bhopal is the Capital City of Madhyapradesh State and connected with AIR and Train services. If the G.N Board approves Mr. Dixit can be given the necessary directions.

NAGPUR DECLARATION
The National Conference held at Nagpur on 9-10,October 2010 on Achieving Nuclear Weapons and Missile Defence Free Asia welcomes the statement of External Affairs Minister of India supporting Nuclear Disarmament in the UN Conference on Disarmament held on 24th Sept 2010.This conference suggests that the Nuclear Nations of Asia,like China,India,Pakistan,North Korea and Israel jointly work for a Nuclear Free Asia and the World.To begin with they should hold a Conference shortly to deliberate on this important issue.

Many Asian Countries like China,India,South Korea,Japan and Israel are making rapid strides in the Space technology.This Conference alerts that the these countries should not drift away from the policy of Space for Peace only and not to promote and participate in any Militarisation and weaponisation of Space.In addition they should collaborate with the efforts of Russia,China and Canada in the United Nations to Prevent an Arms Race in the outer Space.

This Conference demands the dismantling of all Foreign Military Bases of US in Japan,South Korea,Diego Garcia,Phillippines, Thailand,Gaum and other Asian Countries.US is trying to expand NATO into Asia which is very dangerous and provocative and this Conference opposes this move and appeales to the people of Asia to oppose these US moves.

The imperialist forces engineered many conflicts in Asia.Inspiteof these conflicts, Asia is now rising.The economic growth of India,China and Vietnam etc is note worthy.If Asian Countries are not involved in Nuclear and Space Arms races and reduce their military budgets,it will help to develop the human development of the people to a very extent.To address various political,security and economic issues,Asian countries should explore the possibility of establishing Asian Union on the lines of the European Union..

J.NARAYANA RAO
Posted by NO Base Stories of Korea at 8:44 AM