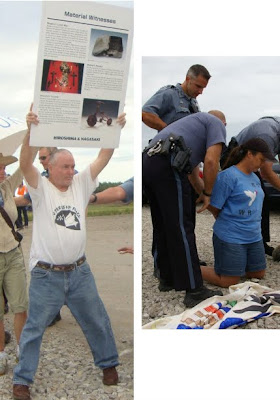 "The evidence in these cases does not support the charge of Disorderly
Conduct. The cases have been dismissed."

Victory in KC!!!! The campaign goes on... please join the KC Peace
Planters for our next effort in KC Nov 3-4.... see below news release.

Protesters of a new nuclear weapons production plant will chant, “Beans, not bombs!” at a festival of hope Nov. 3 and a rally Nov. 4.
Excavation is under way at a former soybean field at Mo. Hwy. 150 and Botts Road, near Grandview, for a National Nuclear Security Administration campus that will make or procure 85 percent of U.S. nuclear weapons components. The new plant will replace the Kansas City Plant at Bannister Federal Complex, which supplies guidance systems,
triggers and other non-nuclear parts for warheads.

Kansas City has sold municipal bonds for up to $815 million to finance the new plant, and the city’s Planned Industrial Expansion Authority holds the title to the campus. “Kansas City will have the world’s only municipally owned nuclear weapons production plant,” says Scott Dye of Columbia, Mo. The director of Sierra Club’s National Water Sentinels Program, Dye will speak at the 7 p.m. festival of hope at the St. Paul School of Theology library, 1535 E. Van Brunt Dr., L202. Referring to an NBC Action News, Channel 41, list of those who have become sick or died (see http://media2.nbcactionnews.com/pdf/sickBANNISTERlist.pdf) from toxins at Bannister Federal Complex, Dye says, “One hundred twenty-two people have died from working at the Bannister complex. Nothing will happen at the new plant but death—no warm fuzzies, no puppies or babies. They’re creating a manufacturing plant whose sole function is to create death and mayhem—nuclear weapons have no other function.”

About eight years ago, Dye led Sierra Club members in posting danger signs by discharge pipes from the KC Plant to Indian Creek and the Blue River. He had discovered reports indicating PCB (polychlorinated biphenyl) levels up to 22,000 times higher than acceptable. “If the government isn’t going to tell you what’s going on, we will,” he says. At the Nov. 4 rally, from 1 to 3 p.m. on the Mo. Hwy. 150 public right-of-way near the new plant site, KC Peace Planters will carry crosses for those who reportedly died from working at the Bannister complex. The activists will sow seeds, post signs and offer flyers to drivers.

Sarah Cool, who will speak at the rally and the festival, lives at Cherith Brook Catholic Worker House in northeast KC, where neighbors can take showers and obtain clothing and food. Cool helped block a bus-load of officials going to the plant’s groundbreaking Sept. 8. “The police shoved us to the side, at least twice, as we tried to stop a bus,” she recalls. “We tried again to move in front of a bus, and Erik Johnson (from Tennessee) knelt down with his sign. I immediately knelt, thinking, ‘We’re praying, and we’re protesting. We’re not budging.’”

Another resister Sept. 8, Jim Hannah, a retired Community of Christ minister in Independence, Mo., and a PeaceWorks-KC Board member, will also speak at the festival. “The charge against us for our peace witness was acting in a disorderly manner,” says Hannah. “I feel strongly that the disorderly conduct was not so much on the part of the resisters as by the people trying to profit from making weapons of mass destruction.” (See attached doc with Jim's "Why are we making weapons of mass destruction in KC?" from the Oct 8, 2010 Examiner - Independence MO news paper or go to:
http://www.examiner.net/opinions/opinions_columnists/x710516816/Guest-Column-Why-are-we-making-weapons-of-mass-destruction-in-KC)