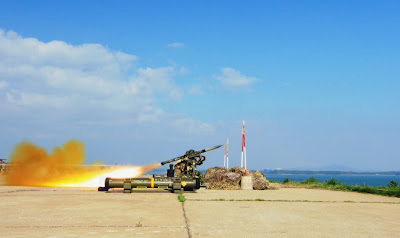 The military will enter its highest level of alert from late this month to ensure a successful hosting of the G20 summit in Seoul next month.

The Joint Chiefs of Staff said Sunday, “Military preparedness, which is established in three phases, will entered the highest level of Phase 3 toward the end of the month.”

“In Phase 3, our military will step up joint surveillance and preparedness with the U.S., raise preparedness against North Korea’s infiltration and aggression, and establish an integrated defense preparedness system of civilians, government and military while providing assistance to the defense of important national facilities.”

A military operation headquarters was set up Sept. 1 and eight types of military aggression by North Korea were defined, including intrusions into the Northern Limit Line, as well as nine types of terrorist attacks meant to disrupt the Seoul event, including those using ultra-light flying devices.

The Joint Chiefs of Staff said, “We will deploy troops at major national infrastructure facilities and mountainous areas near the event site just before the Seoul summit, conduct inspection and control of vessels in waters near airports through joint operation with the Korea Coast Guard, search for submarines in the sea, and beef up airborne surveillance and emergency standby of surface-to-air artillery troops for the air.”

The military will also share information on the enemy’s moves and intelligence on terrorism through joint collaborative operations with the U.S. and expand the operation of joint surveillance facilities, including U-2 reconnaissance planes.

On Koreans' proposal (especially from the Korean Confederation of Trade Unions) please click here.
Posted by NO Base Stories of Korea at 1:56 AM