Text Fwd: Heroes They Are Not: GI's Kill for Sport in Afghanistan 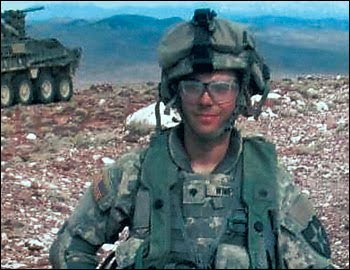 * Image source & caption: same as the below link

AT JOINT BASE LEWIS-MCCHORD, WASH.

The U.S. soldiers hatched a plan as simple as it was savage: to randomly target and kill an Afghan civilian, and to get away with it.

For weeks, according to Army charging documents, rogue members of a platoon from the 5th Stryker Combat Brigade, 2nd Infantry Division, floated the idea. Then, one day last winter, a solitary Afghan man approached them in the village of La Mohammed Kalay. The "kill team" activated the plan.

One soldier created a ruse that they were under attack, tossing a fragmentary grenade on the ground. Then others opened fire.

According to charging documents, the unprovoked, fatal attack on Jan. 15 was the start of a months-long shooting spree against Afghan civilians that resulted in some of the grisliest allegations against American soldiers since the U.S. invasion in 2001. Members of the platoon have been charged with dismembering and photographing corpses, as well as hoarding a skull and other human bones.

The subsequent investigation has raised accusations about whether the military ignored warnings that the out-of-control soldiers were committing atrocities. The father of one soldier said he repeatedly tried to alert the Army after his son told him about the first killing, only to be rebuffed.

Two more slayings would follow. Military documents allege that five members of the unit staged a total of three murders in Kandahar province between January and May. Seven other soldiers have been charged with crimes related to the case, including hashish use, attempts to impede the investigation and a retaliatory gang assault on a private who blew the whistle.

Army officials have not disclosed a motive for the killings and macabre behavior. Nor have they explained how the attacks could have persisted without attracting scrutiny. They declined to comment on the case beyond the charges that have been filed, citing the ongoing investigation.

But a review of military court documents and interviews with people familiar with the investigation suggest the killings were committed essentially for sport by soldiers who had a fondness for hashish and alcohol.

The accused soldiers, through attorneys and family members, deny wrongdoing. But the case has already been marked by a cycle of accusations and counter-accusations among the defendants as they seek to pin the blame on each other, according to documents and interviews.

The Army has scheduled pre-trial hearings in the case this fall at Joint Base Lewis-McChord, home of the Stryker brigade. (The unit was renamed the 2nd Stryker Brigade, 2nd Infantry Division, when it returned from Afghanistan in July.) Military officials say privately that they worry the hearings will draw further attention to the case, with photos and other evidence prompting anger among the Afghan civilians whose support is critical to the fight against the Taliban.

According to statements given to investigators, members of the unit - 3rd Platoon, Bravo Company, 2nd Battalion, 1st Infantry Regiment - began talking about forming a "kill team" in December, shortly after the arrival of a new member, Staff Sgt. Calvin R. Gibbs, 25, of Billings, Mont.

Gibbs, whom some defendants have described as the ringleader, confided to his new mates that it had been easy for him to get away with "stuff" when he served in Iraq in 2004, according to the statements. It was his second tour in Afghanistan, having served there from January 2006 until May 2007.

The first opportunity presented itself Jan. 15 in the Maiwand district of Kandahar province. Members of the 3rd Platoon were providing perimeter security for a meeting between Army officers and tribal elders in the village of La Mohammed Kalay.

According to charging documents, an Afghan named Gul Mudin began walking toward the soldiers. As he approached, Cpl. Jeremy N. Morlock, 22, of Wasilla, Alaska, threw the grenade on the ground, records show, to create the illusion that the soldiers were under attack.

Pfc. Andrew H. Holmes, a 19-year-old from Boise, Idaho, saw the grenade and fired his weapon at Mudin, according to charging documents. The grenade exploded, prompting other soldiers to open fire on the villager as well, killing him.

In statements to investigators, the soldiers involved have given conflicting details. In one statement that his attorney has subsequently tried to suppress, Morlock said that Gibbs had given him the grenade and that others were also aware of the ruse beforehand. But Holmes and his attorney said he was in the dark and opened fire only because Morlock ordered him to do so.

"He was unwittingly used as the cover story," said Daniel Conway, a civilian defense attorney for Holmes. "He was in the wrong place at the wrong time."

Morlock, Holmes and Gibbs have each been charged with murder in the shooting. Attorneys for Morlock and Gibbs did not return phone calls seeking comment.

On Feb. 14, Christopher Winfield, a former Marine from Cape Coral, Fla., logged onto his Facebook account to chat with his son, Adam, a 3rd Platoon soldier who was up late in Afghanistan. Spec. Adam C. Winfield confided that he'd had a run-in with Gibbs, his squad leader. He also typed a mysterious note saying that some people get away with murder.

When his father pressed him to explain, Adam replied, "did you not understand what i just told you." He then referred to the slaying of the Afghan villager the month before, adding that other platoon members had threatened him because he did not approve. In addition, he said, they were bragging about how they wanted to find another victim.

"I was just shocked," Christopher Winfield said in a phone interview. "He was scared for his life at that point."

Finally, he said, he called the Fort Lewis command center and spoke for 12 minutes to a sergeant on duty. He said the sergeant agreed that it sounded as if Adam was in potential danger but that, unless he was willing to report it to his superiors in Afghanistan, there was little the Army could do.

"He just kind of blew it off," Christopher Winfield said. "I was sitting there with my jaw on the ground."

Winfield said he doesn't recall the name of the sergeant he spoke with. Billing records that he kept confirm that he called Army officials; he also kept copies of transcripts of Facebook chats with this son. He said he specifically told the sergeant of his son's warning that more murders were in the works.

Army investigators have since taken a sworn statement from Christopher Winfield, as well as copies of his phone and Internet records.

Eight days after Winfield tried to warn the Army, according to charging documents, members of the 3rd Platoon murdered someone else.

On Feb. 22, Marach Agha, an Afghan civilian, was killed by rifle fire near Forward Operating Base Ramrod in Kandahar province, where the 3rd Platoon was stationed. The Army has released few details about the slaying but has charged Gibbs, Morlock and Spec. Michael S. Wagnon II of Las Vegas with murder.

Wagnon has also been charged with possessing "a skull taken from an Afghan person's corpse." He allegedly took the head sometime during January or February 2010, but court documents do not specify whether it belonged to the Afghan he is charged with killing.

An attorney for Wagnon, who was on his second tour in Afghanistan and also served in Iraq, did not return a call seeking comment.

More mayhem followed in March, when Gibbs, Wagnon and three other soldiers - Staff Sgt. Robert G. Stevens, Sgt. Darren N. Jones and Pfc. Ashton A. Moore - opened fire on three Afghan men, according to charging documents. The documents do not provide basic details, such as the precise date of the shooting, the identities of the victims or whether they were wounded.

Members of the 3rd Platoon found their next victim on May 2, documents show. Gibbs, Morlock and Adam Winfield - the son of the former Marine who said he tried to alert the Army three months earlier - are accused of tossing a grenade and fatally shooting an Afghan cleric, Mullah Adahdad, near Forward Operating Base Ramrod.

Winfield's attorney, Eric S. Montalvo, said his client was ordered to shoot but fired high and missed. He and Winfield's parents say they can't understand why the Army has charged their son, given that his father tried to warn officials about the platoon.

Military police caught wind of the final killing a few days later, but only by happenstance. Records show they were coincidentally investigating reports of hashish use by members of the 3rd Platoon.

After word leaked that one soldier had spoken to military police, several platoon members retaliated, records show. They confronted the informant and beat him severely - punching, kicking and choking the soldier, then dragging him across the ground. As a last warning, the documents state, Gibbs menacingly waved finger bones he had collected from Afghan corpses.

However, the informant talked to the MPs again and told them what he had heard about the slayings, according to court documents.

Some members of his unit, he said in a statement, "when they are out at a village, wander off and kill someone and every time they say the same thing, about a guy throwing a grenade, but there is never proof."

This time, the Army acted quickly and made arrests.

Staff researcher Julie Tate in Washington contributed to this report.