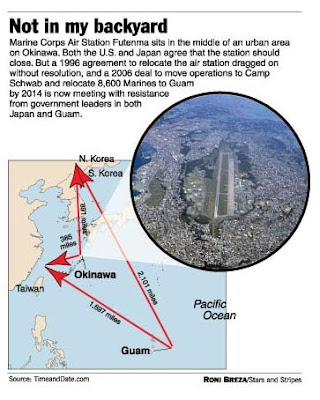 
TOKYO — When it comes to regional security, many Western Pacific nations like the idea of thousands of U.S. Marines permanently stationed close by. As long as they are not too close.

As part of a complex plan to reduce the sprawling American military presence on the Japanese island of Okinawa, U.S. officials approached Thailand, Singapore, the Philippines and Australia about the possibility of hosting permanent new American military bases.

All four said no.

That left tiny Guam, which for more than six decades has served as a reliable American staging point during wars and an often-forgotten port and air strip during peacetime.

Military leaders say that maintaining a stable home for U.S. troops in Asia is vital for security in a region where Islamic extremists are fighting in the Philippines and Indonesia, North Korea remains erratic and threatening, and China is seeking to expand its economic and military influence.

Even if that stable home is more than a thousand miles from Japan.

“It’s a U.S. possession that’s the closest to Asia,” said Rick Castberg, an emeritus professor of political science at the University of Hawaii at Hilo. “I think the military sees it as invaluable.”

What’s more, the plans for stationing 8,600 Marines on Guam fit with the military’s emphasis on building long-lasting bases around the world that can provide rapid, flexible response in times of crisis. And it’s a friendly home for U.S. military assets that are not always welcome elsewhere, such as nuclear-powered aircraft carriers and high-flying Global Hawk surveillance drones.

“Guam is, in some ways, the poster child for that kind of notion, where you can operate as you need to, to take on new challenges flexibly,” said Derek Mitchell, the principal deputy assistant secretary of defense for Asian and Pacific Security Affairs. “It is central, I think, to realignment strategy.”

Many on Guam embraced the proposed U.S. expansion and the prospect of additional federal money for the island’s crumbling infrastructure and struggling public services. The long-term military investment — an estimated $10.3 billion for the Marines’ move alone — would put money back into a part of the United States, another benefit of building inside the country, Mitchell said.

But as plans have evolved, so have concerns about how the island’s 178,000 residents will handle a huge spike in permanent population, which will be an estimated 34,000 new troops, civilian workers and dependents. The fast-paced construction schedule also could add nearly 80,000 temporary workers to the island by 2014.

Last month, the U.S. Environmental Protection Agency sharply criticized as “inadequate” the environmental impact statement that the military prepared in advance of the Guam expansion, noting that the massive project would “exacerbate existing substandard environmental conditions.”

Among the environmental agency’s concerns: threats to 71 acres of coral reef in Guam’s main harbor and contamination risks to the island’s only freshwater aquifer.

Other critics on Guam are concerned about plans to build expanded firing ranges and increase training flights on the island.

Madeleine Bordallo, Guam’s delegate to Congress, said last month she would withdraw support for the buildup unless the Pentagon slows its construction plans. Around the same time, Sen. Jim Webb, D-Va., who chairs the Senate Armed Services personnel subcommittee, visited Guam and Japan and said he shared concerns about the construction schedule.

“Specifically, the U.S. government should recognize the needs and sensitivities of the people and the limitations of space on the island,” he said in a written statement after the trip. “If the United States remains committed to an active forward presence in Asia, and an increased U.S. military presence on Guam, then it must demonstrate that commitment by providing the civilian infrastructure and services needed to support an increased population on the island.”

Yet the military doesn’t seem to be backing down. In fact, it’s asking Guam to do more. The Army is now looking at Guam as one of five possible locations for its new joint high speed vessels.

“When God gives you a gift,” said Stephen Yates, a senior fellow in Asian studies for the American Foreign Policy Council, “it’s good to use it.”
Posted by NO Base Stories of Korea at 9:38 PM