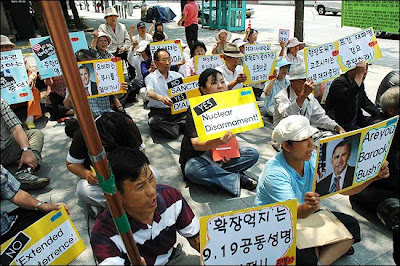 * Image source: Solidarity for Peace And Reunification of Korea, June 16, 2009

For the cause of peace and stability on the Korean Peninsula and in Northeast Asia at large, the Six Parties held, in the spirit of mutual respect and equality, serious and practical talks concerning the denuclearization of the Korean Peninsula on the basis of the common understanding of the previous three rounds of talks, and agreed, in this context, to the following:

1. The Six Parties unanimously reaffirmed that the goal of the Six-Party Talks is the verifiable denuclearization of the Korean Peninsula in a peaceful manner.

The DPRK committed to abandoning all nuclear weapons and existing nuclear programs and returning, at an early date, to the Treaty on the Non-Proliferation of Nuclear Weapons and to IAEA safeguards.

The United States affirmed that it has no nuclear weapons on the Korean Peninsula and has no intention to attack or invade the DPRK with nuclear or conventional weapons.

The 1992 Joint Declaration of the Denuclearization of the Korean Peninsula should be observed and implemented.

The DPRK stated that it has the right to peaceful uses of nuclear energy. The other parties expressed their respect and agreed to discuss, at an appropriate time, the subject of the provision of light water reactor to the DPRK.

2. The Six Parties undertook, in their relations, to abide by the purposes and principles of the Charter of the United Nations and recognized norms of international relations.

The DPRK and the United States undertook to respect each other's sovereignty, exist peacefully together, and take steps to normalize their relations subject to their respective bilateral policies.

The DPRK and Japan undertook to take steps to normalize their relations in accordance with the Pyongyang Declaration, on the basis of the settlement of unfortunate past and the outstanding issues of concern.

3. The Six Parties undertook to promote economic cooperation in the fields of energy, trade and investment, bilaterally and/or multilaterally.

China, Japan, ROK, Russia and the US stated their willingness to provide energy assistance to the DPRK.

The ROK reaffirmed its proposal of July 12th 2005 concerning the provision of 2 million kilowatts of electric power to the DPRK.

4. The Six Parties committed to joint efforts for lasting peace and stability in Northeast Asia.

The directly related parties will negotiate a permanent peace regime on the Korean Peninsula at an appropriate separate forum.

The Six Parties agreed to explore ways and means for promoting security cooperation in Northeast Asia.

5. The Six Parties agreed to take coordinated steps to implement the afore-mentioned consensus in a phased manner in line with the principle of "commitment for commitment, action for action".

6. The Six Parties agreed to hold the Fifth Round of the Six-Party Talks in Beijing in early November 2005 at a date to be determined through consultations.


Solidarity for Peace And Reunification of Korea:
Letter Sent to the Presidents of the Republic of Korea and the United States on the Occasion of the Korean-US Summit Conference (2009.6.16)

'The ROK and the US intend to convert the ROK-US alliance into a global and permanent alliance. Burwell Bell, while acting as the USFK commander, said that he hoped that the US troops would be stationed in Korea even after a Korean peninsula peace agreement is concluded, and last July, Timothy Keating, the US Pacific commander, explained that while the USFK are stationed here permanently, the US troops would participate in humanitarian aid or disaster relief operations and the like.

This shows clearly that the US intends to continue the stationing of the USFK and the ROK-US alliance permanently. The "joint vision for the future ROK-US alliance", which aims to perpetuate the aggressive ROK-US alliance, goes against the trend of our time, which is to establish a structure of peace and security for the Korean peninsula and Northeast Asia by means of the withdrawal of foreign military forces, the abolition of the military alliance, and achieving peace and disarmament. In particular, stipulating "extended deterrence" in the "joint vision for the future ROK-US alliance", runs counter to the 9.19 joint statement which declares the goal of denuclearization of the Korean peninsula.'