* Peace Philosophy Center
Saturday, September 11, 2010
DoD: Joint Use of "ALL" bases in Japan, and Operation of Ospreys 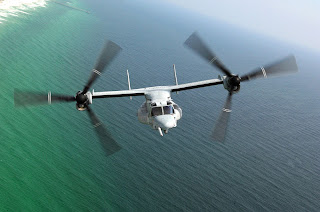 See below an excerpt from the September 9 press briefing by Assistant Secretary of Defense Geoff Morrell, talking about the U.S. and Japanese joint use of "all facilities in Japan," including the FRF("Futenma Relocation Facility"), and confirming their plan to operate MV-22 Ospreys will operate in Japan.

What Morrell indicates is that the joint use of military bases and operation of Ospreys apply to ALL military bases in Japan, not just in Okinawa. Could Ospreys operate in and out of Iwakuni as well ?

Okinawans are angry about the fact that the Japanese government has concealed the Osprey plan until earlier this month. The environmental impact assessment did not pay consideration to the Osprey operations either.

The Japanese and U.S. governments must be fully accountable for their plans to jointly use the military bases in Japan, and their plans to operate MV-22 Ospreys, dangerous aircrafts dubbed "Widow Makers" for their frequent accidents.

From the transcript of September 9 Press Briefing of DoD (Department of Defense website).

MR. MORRELL: I think, Yoso, as you are aware, the ministers have agreed to look at joint or shared use of, frankly, all facilities in Japan, the FRF among them. But the mandate of the Experts Study Group was to look at the facility's location, configuration and construction method.

So looking at shared use was beyond the scope of their mandate, as were a slew of other issues. So that was never their charge.

However, there is a separate consultative process that will, indeed, study, you know, the expansion of joint and shared use of U.S. military and Japanese facilities in order to improve the effectiveness of the alliance's defense posture. So we do anticipate those discussions to take place. They just weren't a part of this first -- the working group -- the experts' group, their mandate, okay?

Okay. You also had another question that you sent me, I think. It was about the Ospreys. And what I would say to you there is yes, we anticipate that Ospreys will indeed operate in Japan. And we've -- and we've told the Japanese government as much. You know, where and when and how are things to be determined. But this is obviously an incredibly effective form of airlift that will enhance our alliance capabilities. And so we do anticipate the deployment of Ospreys to our facilities in Japan at some point.