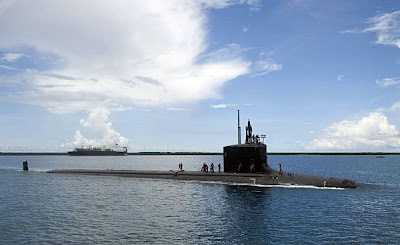 The ship departed Joint Base Pearl Harbor-Hickam for a scheduled deployment to the Western Pacific region Aug. 25.

With a crew of 136, this is the ship's first deployment from Pearl Harbor.
Hawaii will be conducting a multitude of missions while assigned to 7th Fleet during the next several months.

"Guam, as a port, plays a vital role in the U.S. military's efforts to fulfill our commitments to our allies and partners and to protect our nation's security," said Capt. John Russ, commodore for Submarine Squadron 15....

Measuring 377 feet long and weighing 7,800 tons when submerged, Hawaii is one of the Navy's newest and most technologically sophisticated submarines. 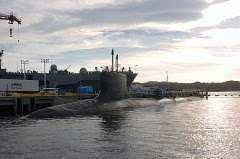 YOKOSUKA NAVAL BASE, Japan: The USS Hawaii's arrival at Yokosuka on Friday marks the first port visit by a Virginia-class submarine in the Western Pacific.

The USS Hawaii’s arrival on Friday at Yokosuka for a port visit signaled the first time a Virginia-class submarine has entered the Western Pacific, Navy officials said Tuesday.

The relatively new fast-attack submarine’s arrival in Asian waters represents yet another piece of the Navy’s shift toward watercraft and weaponry designed to operate in nearshore waters.
....
....
Submarine commanders tend to avoid talking about specific countries and operations, but they’re usually happy to talk about their boats. Mack was no exception aboard the Hawaii on Tuesday.

The Hawaii can not only drive itself, it can auto-hover and auto-stabilize, keeping the boat as quiet as possible while avoiding detection at varied depths, Mack said.

It also uses a sonar “chin array” to detect mines and other threats beneath the boat, an upgrade over the older Los Angeles-class subs that the Hawaii and boats like it are replacing.
“The Los Angeles-class is extremely capable, but it was designed in an era more focused on open ocean,” said Cmdr. Jeff Davis, spokesman for the 7th Fleet, which oversees the Western Pacific. The Hawaii and its class “add a lot of value, particularly in ... the littoral environments in which we operate.”

The new capabilities would aid the Hawaii if it ever operated in the often shallow waters near the Korean Northern Limit Line, where international investigators believe the South Korean ship Cheonan was destroyed by a North Korean torpedo in March.

The Hawaii also has an airlock chamber which it can use to launch Navy SEAL teams into nearshore waters.

Davis said the Hawaii was not scheduled to participate in a U.S.-South Korean anti-submarine exercise that was postponed this week due to a tropical storm off the peninsula.

He said there is no special reason why a Virginia-class sub hadn’t shown up in the Western Pacific sooner. However, with 12 Virginia-class subs expected to be ready by 2015, the boats will likely play an increasingly larger role in 7th Fleet plans.