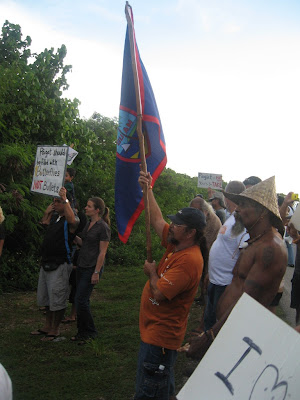 * Image source: same as in the link

No Rest for the Awake: Minagahet Chamorro blog
by Michael Lujan Bevacqua
Sept. 2, 2010

'The DEIS (Draft Environmental Impact Statement) comment period was an incredible three months. The public engagement and critique was far beyond anyone could have expected. 9,000 – 10,000 comments were submitted to the Joint Guam Program Office, thousands and thousands more than they most likely anticipated. The public comment meetings were dominated by people who were either against the buildup or at least suspicious about how this sort of massive movement of people and rapid haphazard period of development could be beneficial for Guam long-term. Throughout the DEIS comment period, I was trying my best to keep up with what was going on, and wrote a series of blog posts about how we could see the buildup as a process “breaking down.” The idea of it “breaking down” wasn’t meant to convey that it wasn’t going to happen or that it had been valiantly stopped, but more to discuss how opinions of it, representations of it, and even political decisions about it were changing and moving. The buildup was always a massive, complicated, kaduku and impossible thing, but this aspect was something most people on Guam did not take seriously. Deeply embedded colonizing thoughts that whatever is good for the US is good for Guam, or that Uncle Sam is always looking out for Guam created a gigantic bubble, which made this ridiculously large project seem more like a dream than reality. The buildup was for years a golden ticket, something which would make dreams come true. Another way in which Guam reinvents its dependency upon the United States, through emotional nationalism and deluding optimism. People didn’t know a lot of details, but didn’t really have to, since those details would be taken care of by others who we can be certain are much better at their jobs than anyone on Guam and only have Guam’s interests at heart.

The DEIS comment period (thankfully) did a lot to change this. The DEIS document and those people who did the difficult work of translating it and interpreting it for the public, laid bare the scope and the damage the buildup entails. The news media, started to reach beyond the official DOD line that comes from JGPO and look at what the murmurs were in Japan and Washington D.C. and suddenly things seemed less certain, less inevitable. Not only was there a very real possibility that this buildup would not make Guam’s dreams come true, but in fact it could do far more damage than anyone had imagined, to the environment, society and the economy. Even the promises which were made that Guam would swim in more money than it could ever hope to spend, were clearly not enough to cover the costs of increasing Guam’s social capacity enough to handle the population increases or the damage that would be caused at Apra Harbor. Today, the perceptions of the buildup are far closer to where they should be than ever before. People see the buildup as both positive and negative, and by this I don’t mean they see it has something bubula’ ni positives, with unu pat dos na negatives. They see it as something which could improve some things, but could also damage others. And the positives in no clear way outweigh the negatives. This is the point which Guam should have been at 4 years ago, in the first days of this buildup, because then it could have adequately prepared for either handling or challenging this buildup.

FOR MORE READING, SEE'
Posted by NO Base Stories of Korea at 10:53 AM