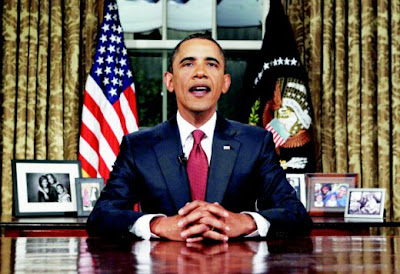 U.S. President Barack Obama speaks after addressing the nation about the end of the U.S. combat mission in Iraq from the Oval Office of the White House in Washington, August 31. (REUTERS Yonhap News)

Hankyoreh
S.Korea and U.S. chart new path following end of Iraq combat mission
:The war caused fissures in the Roh administration, inflated the U.S. deficit, and resulted in thousands of casulties
Posted on : Sep.2,2010 14:48 KST
By Kwon Tae-ho, Washington Correspondent
“I thought so then and even now that sending troops to Iraq would go down in history as a mistake. As a president, however, it was an unavoidable, inevitable choice.” These were the thoughts of late President Roh Moo-hyun on the Iraq deployment, as revealed in his memoir, “Success and Setbacks.”
The Roh administration tried to use the Iraq deployment as a lever to get the George W. Bush administration to ease its hardline policy on North Korea and resolve the nuclear issue. This was because in spring 2003, immediately after the launch of the Roh administration, hardline rhetoric coming from the United States was rife, including calls to bomb North Korea to eliminate its nuclear program.
At the end of April 2003, one month after the U.S. invasion of Iraq, South Korea sent about 300 non-combat troops, including engineers and medics, to Iraq to help the United States. The controversy continued throughout 2003. Ultimately, after controversy, the National Assembly passed a resolution to send troops to Iraq in February 2004.
Roh, who pledged before his inauguration to say what he had to say to the United States, and get red in the face when it was time to get red in the face, explained that the Iraq deployment was an inevitable choice to stop the possibility of war on the Korean Peninsula resulting from the North Korean nuclear crisis.
Roh’s base, which conducted a movement against the deployment, began turning its back on the Roh administration, saying it had participated in America’s immoral war of aggression. Due to the Iraq deployment, a crack developed in the faith between the Roh administration and its base.
After more than a year of controversy, the Zaytun Division was deployed to the northern Iraqi town of Arbil in September 2004. The Zaytun Division was tasked with supporting reconstruction through job training and building schools. At one time, the Zaytun Divison consisted of 3,800 troops, but its numbers were reduced in February 2005. When they completed their mission and were withdrawn in December 2008, they stood at about 520 troops. The Zaytun Division, South Korea’s largest overseas deployment since the Vietnam War, sent a total of 19,100 troops to Iraq over four years and three months.
The National Assembly voted to extend the deployment four times.
On Aug. 31 (local time), at the very desk in the White House Oval Office where former President George W. Bush declared war seven years and five months ago, current U.S. President Barack Obama officially declared an end to the Iraq War. It was hard to find U.S. reflection regarding a war that showed off the unique power of the United States and changed the landscape of 21st century war and the international order.
In an 18-minute televised address that evening, Obama said the United States had performed all its responsibilities as it went through an important period in U.S. and Iraqi history, and the U.S. combat mission in Iraq ended today. He stressed that now the Iraqi people would have to take a leading responsibility in their own security. U.S. troops in Iraq, which increased to 171,000 in 2007, will be maintained at the 50,000 level. The remaining U.S. troops are non-combat troops training Iraqi troops and police, and they will also be completely withdrawn by the end of next year.
Obama strongly revealed the intention to finish the Iraq War and concentrate on the economy. He said the United States had paid a huge price, and now was the time to turn the page, and that the most urgent mission now was to rescue the economy.
The United States has spent to date $750 billion in the Iraq War, and it is one of the major causes of the U.S. fiscal deficit. Having fought two wars in the Middle East, the United States has made clear its intention to concentrate on Afghanistan.
Perhaps conscious of the remaining turmoil in Iraq and the controversy caused by the war, Obama did not use the expressions “victory” or “defeat.” Saying that he differed in opinion with Bush about starting the Iraq War, he hinted in an indirect way that the Iraq War was a failed policy committed by his predecessor.
He also stressed, “As the leader of the free world, America will do more than just defeat on the battlefield those who offer hatred and destruction - we will also lead among those who are willing to work together to expand freedom and opportunity for all people.”
To the fundamental question of the international community as to whether this war, started on the pretext of weapons of mass destruction that did not exist, was a war really worth fighting, he did not answer.
Over 100,000 Iraqi civilians and about 4,700 coalition troops, including 4,400 U.S. troops, were killed in the Iraq War.
Please direct questions or comments to [englishhani@hani.co.kr]
Posted by NO Base Stories of Korea at 11:39 PM