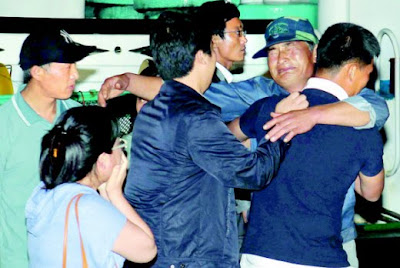 Crew members of South Korean squid boat Daesung 55 are reunited with family members upon their return at a port of the Sokcho Maritime Police, in Sokcho, Gangwon Province, on Tuesday, Sept. 7. North Korea released the seven crew members, including three who are Chinese, after capturing and detaining them for 30 days. (Photo by Rhee Jong-chan)

North Korea made an official request to South Korea through the Red Cross for rice, heavy equipment and cement as aid to recover from recent floods. The South Korean government is strongly considering the request.

The Ministry of Unification said the North Korean Red Cross sent a telegram to the head of the South Korean Red Cross on Sept. 4 through the Kaesong Industrial District Management Committee. North Korea reportedly stated that since South Korea had offered aid for the floods, it would be best to send rice and cement, cars and bulldozers needed for the reconstruction rather than emergency food and daily sundries.

Meeting with reporters Tuesday, a high-ranking Cheong Wa Dae (the presidential office in South Korea or Blue House) official said in response to North Korea’s request, “The government will soon announce whether it will send rice aid to North Korea, and is also considering which items would be best to send within the 10 billion Won of aid it has already notified North Korea it would send.”

“North Korea has never stated what it needs, and since it made a detailed request this time, it is different from the past,” the official also said. “In the flow of inter-Korean relations, this is positive.”

Another high-ranking government official also said since a counterproposal had come from the beneficiary, the request would be considered, hinting that it could be accepted. He added that the flood aid was of an emergency and humanitarian character, and that the aid would be extended not by the government, but by the Red Cross.

The fact that North Korea would in effect swallow its pride and ask for rice is believed to have just as much to do with feeling out South Korean authorities’ intention to give aid to North Korea as it does with actual needs.

For North Korea, heavy equipment and cement are classified as actual necessary items needed for the post-flood reconstruction. Thus far, South Korea has strongly refused to send rice to North Korea, stating that unlike flour or corn, rice might be used for the military. In response, some observe that the North Korean request was a demand for a change in the direction of South Korea. It appears Pyongyang may intend to take into account public sentiment in South Korea. Many in South Korea have increased calls, particularly those in the National Assembly, including the Grand National Party, for the resumption and support for rice aid.

During a monthly meeting with ruling Grand National Party (GNP) Chairman Ahn Sang-soo, President Lee Myung-bak said in regards to North Korea policy that the people are knowledgeable and watching. President Lee also said that he was going to send aid through the Red Cross in an appropriate amount, and this was a step forward.

Analysts have also interpreted the president’s comments as support for sending aid to North Korea.

If the Lee administration decides to give aid to North Korea through the Red Cross, this would lead to the convening of a Red Cross meeting. In turn, the meeting could become an opportunity to change the inter-Korean relations that have remained frozen due to the sinking of the Cheonan.

“If South Korea sends rice and heavy equipment after North Korea sends back the captured South Korean fishing boat Daesung, it could become a chance to improve relations through a chain of inter-Korean humanitarian measures,” said Ko Kyung-bin, former head of the Unification Ministry’s policy promotion headquarters. “This requires a forward-looking posture from the government.”

There are also those forecasting, however, that as this aid is limited to just flood aid, even if rice and heavy equipment is provided to North Korea, it could be difficult for this to lead directly into meaningful improvement in general inter-Korean relations.

Posted by NO Base Stories of Korea at 8:17 PM