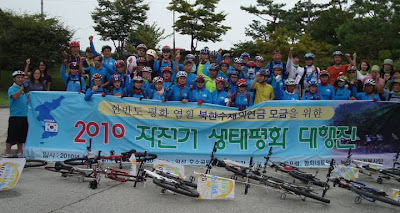 According to the Peace Network(평화 넷트 워크) website, despite the start in the raining morning, about 100 participants joined the bicycle march for the ecology peace and for the help of North Korean brothers & Sisters on Sept. 11, 2010.

The whole distance was 40kim from Ilsan to Imjingak near the Korean Demilitarized zone. The Imjingak is a park that ‘was built to console those from both sides who are unable to return to their hometowns, friends and families because of the division of Korea.’ (For more on Imjingak, Wiki, and also HERE)


* Image source: Official website of the City of Paju

Below is the translation from the end part of the Peace Network report:

“We haven’t known that the Imjingak that we have finally arrived into, after running 40km was so close [from Ilsan that is near Seoul]. While riding a bicycle is like living a life, doesn’t it resemble in the way for unification? In the way for unification, there are ways such as uphill path, flat land, and downhill road. If the uphill path is felt difficult, it is O.K. that you just slowly climb up dragging a bicycle. It is O.K. only if you don't give up and persistently continue to go toward a destination. We aspire that our running a whole distance with bicycle is followed by the running a whole distance for the unification.”