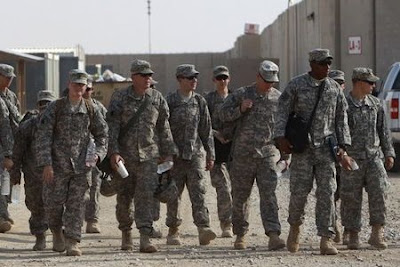 * Text informed from the Breaking News and Commentary from Citizens for Legitimate Government on Sept. 6, 2010

Press TV
US 'likely to stay in Iraq beyond 2011' :Despite US announcement of complete withdrawal from Iraq in 2011, Washington will reportedly keep thousands of soldiers in the war-torn nation.

American military experts said the remaining forces are expected to stay in Iraq beyond 2011 as a 'peacekeeping force' for a decade, AFP reported.

However, about 50,000 US troops remain in Iraq supposedly on training and advisory roles until a complete pull out.

Meanwhile, US officials are planning to employ thousands of private contractors to conduct operations formerly performed by US troops.

The United States invaded Iraq in 2003 under the pretext of destroying alleged weapons of mass destruction. However, no such weapons were ever found.

Nearly a trillion dollars have been spent and more than 4,400 US soldiers and countless number of Iraqi civilians have been killed since the invasion began.

* US admits Iraq war outcome 'clouded'
* Obama ends US mission in Iraq
* 'Iraqi forces capable of taking over'
* Biden in Iraq as US ends combat mission
* CBO: US war in Iraq costs $709bn

'The aftermath of another American war is instructive. Fifty-seven years ago, an armistice ended the fighting in Korea — another unpopular conflict, far bloodier than the Iraq war, although shorter. Civilian casualties were horrendous, and the United States and its allies suffered more than half a million military casualties. The South Korean Army took the heaviest losses, but the United States also paid a high price: 33,739 killed or missing in battle and 103,284 wounded. '

[* Note: Some even estimates about 4 million Koreans were killed during the Korean War]

'Some similar considerations apply to Iraq today. First, Iraq occupies a key position in the Persian Gulf, a strategically important region of the world — a position that is all the more important because of the dangerous ambitions of Iran’s rulers.'

'It is well worth celebrating the end of combat operations after seven years, and the homecoming of so many troops. But fully abandoning Iraq would damage the interests of the United States in the region and beyond. Maintaining a long-term commitment, albeit at greatly reduced cost and risk, is the best way to secure the gains that have been achieved with so much sacrifice.'

Paul D. Wolfowitz, a visiting scholar at the American Enterprise Institute, was the deputy secretary of defense from 2001 to 2005.
Posted by NO Base Stories of Korea at 10:59 PM