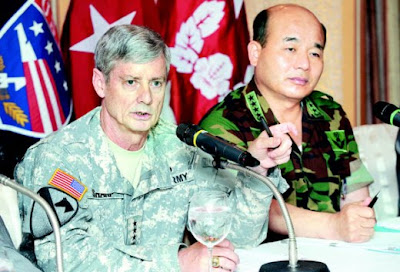 “We are really trying to make sure that we are able to not only defend, not only able to kill and attack, but also able to provide humanitarian assistance and security and stability for the people [in North Korea] because all of those tasks will have to be done via soldiers in future conflict,” Sharp said.

The computer-simulated operation was designed to ensure stability in North Korea in case of war, and is based on lessons the U.S. has learned from its wars in Iraq and Afghanistan, he said. “One of the lessons is that you can be fighting and attacking one area, and in another area the main mission is to stabilize and protect the population.”

Sharp’s remarks could possibly mean that South Korea and the U.S. converted Operation Plan in Concept Format 5029 (CONPLAN 5029) into Operations Plan (OPLAN 5029) in case of the collapse of the North Korean regime and practiced drills with that in mind. Unless CONPLAN 5029 includes the specific process of military forces distribution, it could not become a complete OPLAN 5029.

No USFK commander so far has openly mentioned such drills, which experts speculate were included as part of a new contingency operation plan the two allies are working out.

In late October 2008 the United States reportedly proposed developing a detailed Operations Plan, OPLAN, in the event of the collapse of the North Korean regime.