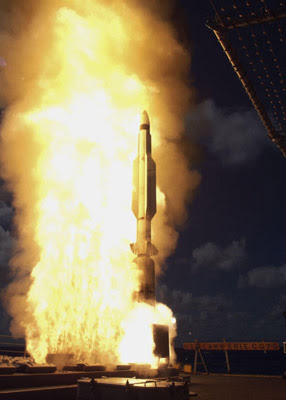 
The Pentagon is planning a $278 million program to increase missile testing on Kauai that would improve the protection of Europe from ballistic missiles from countries such as Iran, and provide an additional element of defense for Hawaii from North Korean threats, officials said.

The "Aegis Ashore" testing would have a land-based missile defense capability similar to the successful ship-based ballistic missile systems on 21 U.S. Navy ships, including six cruisers and destroyers based at Pearl Harbor.

The Obama administration announced in September 2009 plans for the "Phased Adaptive Approach" for the protection of Europe using Navy ships with ballistic missile defense and two land-based versions, probably in Romania and Poland, that would each have 24 SM-3 missiles.

Riki Ellison, chairman of the nonprofit Missile Defense Advocacy Alliance, said the Aegis Ashore program to be tested on Kauai would be "the cornerstone for the system that they are offering to protect all of Europe."
The U.S. Missile Defense Agency also tests ship-based Aegis ballistic missile defenses and the Terminal High Altitude Area Defense missile system on Kauai.

Asked how much of an expansion the Aegis Ashore would represent, Tom Clements, a PMRF spokesman, said by e-mail that "there will be several more flight tests at PMRF over the next five years."

"The decision to conduct new test programs here is an indication that PMRF continues as a range of choice, and a viable source of continued high-tech industry and employment for the island of Kauai," Clements said.

On June 28, the Missile Defense Agency conducted a test of the Terminal High Altitude Area Defense with an interceptor missile launched from Kauai. The test represented the intercept of a short-range missile inside the Earth's atmosphere, and was the seventh of seven tests, all successful.

On July 31, 2009, the Aegis-equipped destroyer USS Hopper fired an SM-3 missile against a simulated short-range ballistic missile launched from Kauai.

The test marked the 19th successful intercept in 23 at-sea firings for Aegis ballistic missile defense, which is designed to defeat short- to intermediate-range missiles above the Earth's atmosphere, and has more than twice the engagement range of the Terminal High Altitude Area Defense missiles.

The systems are part of a layered U.S. ballistic missile defense that includes bigger, more powerful ground-based interceptors in California and Alaska.

The 21-foot-6-inch SM-3 missiles, which cost about $9 million to $10 million apiece for Block IA versions, use a kinetic warhead that smashes into a ballistic missile, destroying it.

A phased deployment for Europe calls for ship-based protection in 2011, and the possible deployment of Aegis Ashore in Romania in 2015. Poland is being considered for the ashore missile defense in 2018.

To meet the 2015 time line, an Aegis Ashore test bed and prototype would have to be built by 2012 at the Pacific Missile Range Facility, Ellison said.

Lockheed Martin last month received a $69.8 million contract from the Missile Defense Agency for the redesign of the Aegis ship-based system to a land-based architecture.

A fiscal 2010 military estimate for the Aegis Ashore program on Kauai places the cost at $278 million for a complex that would include a Mark 41 launcher, a four-story building with a SPY-1 radar and three 125-foot test towers.

U.S. Defense Secretary Robert Gates in June 2009 ordered the possible use of the Terminal High Altitude Area Defense in Hawaii when North Korea threatened ballistic missile firing tests in the path of the state.

Officials said the high altitude and Aegis Ashore systems would provide very limited response capability to an intercontinental ballistic missile, but future generations of the SM-3 missile would be more capable.
Global Network Against Weapons & Nuclear Power in Space
PO Box 652
Brunswick, ME 04011
(207) 443-9502
globalnet@mindspring.com
www.space4peace.org
http://space4peace.blogspot.com/ (blog)
Posted by NO Base Stories of Korea at 8:27 AM