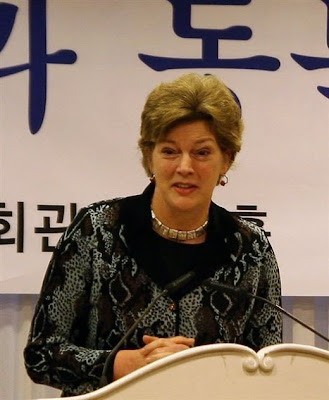 'U. S. Ambassador to South Korea Kathleen Stephens gives a speech at a conference on U.S.-South Korea relations and peace in Northeast Asia at the Sejong Cultural Center, March 10. (Courtesy of the Korean Council for Reconciliation & Cooperation)'

Hankyoreh
U.S. wants KORUS FTA resolution by November : Renegotiations may cause problems for S.Korea, who has voiced adamant opposition to any changes
Posted on : Sep.25,2010 14:43 KST
By Jung Eun-joo

U. S. Ambassador to South Korea Kathleen Stephens said Friday that she has been working closely with the related business partners to conclude discussions over the South Korea-U.S. Free Trade Agreement (KORUS FTA) prior to November, following U.S. President Barak Obama’s instructions.

During the opening ceremony for Chicago Mayor Richard Daley’s press conference at the Grand Hyatt Hotel, Ambassador Stephens said, “President Obama is hoping that working-level discussions for the KORUS FTA will be completed before the G-20 Summit in Seoul and that ratification for the agreement could be introduced to the U.S. Congress.” Stephens went on to say, “Cooperation between South Korea and the United States will be strengthened when the FTA goes into effect.”

“The commitments in the KORUS FTA will provide new opportunities for U.S. service providers and workers in services industries, so we look forward to resolving outstanding issues with the agreement by November’s G-20 Summit in Seoul and submitting it to Congress for approval in the following months,” U.S. Trade Representative Ron Kirk told the 2010 Global Services Summit, a gathering of service industries on Wednesday, according to a transcript released by his office Thursday.

The President of the American Chamber of Commerce in Korea Amy Jackson also said, “The KORUS FTA is coming to critical phrase. The tariff for South Korean consumer goods and industrial products will be lowered by 95 percent in 3 years.”

Chicago Mayor Daley, who is known as a mentor for President Obama, said “I firmly support the ratification of the FTA between two countries.” Daley went on to say, “I sent the relevant letters to president, vice president and the leaders in Congress and I will send an additional letter to Congress to ask for rapid ratification.”

Daley added, “There is friction in some areas such as the auto and beef industries, but these issues can be solved.”
During the summit with President Lee Myung-bak at Toronto in June, President Obama said that U.S. Trade Representative (USTR) and the South Korea’s Ministry of Foreign Affairs and Trade (MOFAT) would make a new pact for the FTA because some parts of the agreement needed adjustment in order to pass through U.S. Congress.

“USTR is holding discussions with relevant businesses, companies and Congress.” said a MOFAT official. “If they ask us for formal negotiations after holding their discussions, we will find creative solutions.”

Please direct questions or comments to [englishhani@hani.co.kr]
Posted by NO Base Stories of Korea at 10:08 PM