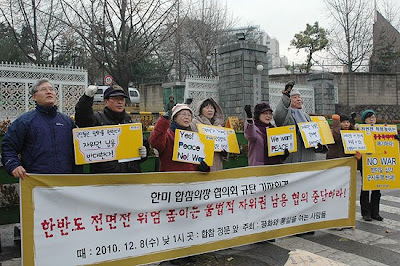 Mullen, the joint Chief of Staffs, implemented Clinton's step by visiting to Seoul and Tokyo during Dec. 8 to 9.

In the above article, we see how Mullen sees the significance of the multilateral alliance:

'Noting the 42 nations contributing troops in Afghanistan, Mullen called multilateral cooperation “the way of the future.”

And it is very today, Dec. 10 that we see the below article. The reactionary Lee Myung-Bak government is drawing its people to more humiliating and aggressive condition of the U.S.-ROK alliance( FTA in economic matter, multilateral military alliance in the military matter). And South Korea is now being more integrated into the strategy of the U.S. and NATO (as Rick Rozoff has constantly worked on it) as we can glance in the below article.

By Lee Chi-dong
PUTRAJAYA, Malaysia, Dec. 10 (Yonhap) -- South Korea and Malaysia agreed Friday to push for a bilateral free trade agreement (FTA) and step up cooperation on energy and defense.

The summit deal reached at a meeting between South Korean President Lee Myung-bak and Malaysian Prime Minister Najib Razak in Putrajaya came as the two sides mark the 50th anniversary of the establishment of diplomatic relations this year.

In their talks held at the prime minister's office in Putrajaya, an administrative city just south of Kuala Lumpur, Lee and Najib also agreed to further enhance defense cooperation between their countries, according to the joint statement. South Korea views Malaysia, along with Indonesia, as a major regional partner for weaponry development and trade.

The leaders agreed to promote both government- and civilian-level collaboration on oil and gas exploration, and production and the development of green technology, bio-technology and information and communications technology.

South Korea-Malaysia partnerships, traditionally boosted by cooperation on natural resources, are now expanding to renewable energy development, such as solar power and electric car battery production, as well as education and culture.

In addition, the leaders agreed to "further cooperate on peaceful uses of nuclear energy" as stated in a 2009 pact between their related government agencies.

Malaysia is a potential market for South Korea's nuclear power technology exports, which were spurred by its US$20 billion contract with the United Arab Emirates a year ago to construct nuclear reactors there.

Otherwise, please check the below