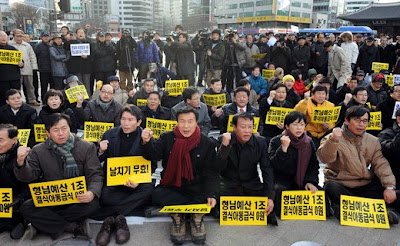 The Kyunghyang Sinmun
Opposition Politicians' Street Protests Against Government's Railroading of Budgets and Bills on at Seoul Plaza
Posted on : 2010-12-13

Railroading of next year's budget and other bills by the government and ruling party, while omitting budget for ordinary people and social welfare, provokes widespread after-shocks.
Go Heung-gil, Chairman of Policy Committee of Hannara Party, resigned from his party position taking responsibility for omitting the budget items. Opposition parties criticized this act as "tail-cutting" and demanded apology from President Lee Myung-bak and resignation of Park Hee-tae, Chairman of the National Assembly.

As a result, the confrontations between ruling and opposition parties intensified, while criticisms and anger among the civic society spread widely.

Hankyoreh
Public disapproves of GNP’s budget railroading, survey shows The public also said the ruling party bore a greater share of the blame for the parliamentary violence Dec. 13, 2010
Posted by NO Base Stories of Korea at 10:52 PM