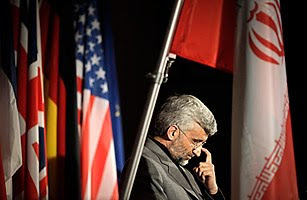 It has long been clear that Iran's domestic political power struggle impedes prospects for any diplomatic breakthrough on the nuclear standoff — just a year ago, a confidence-building fuel swap agreed between Western and Iranian negotiators in Vienna was shot down in Tehran by conservative and reformist rivals to President Mahmoud Ahmadinejad. But U.S. domestic politics too may be coming into play to restrain President Barack Obama from embracing a deal reportedly being discussed with the Iranians by European negotiators.

On Monday, as Iran's nuclear negotiator Saeed Jalili met in Geneva with E.U. foreign policy chief Catherine Ashton, a group of prominent U.S. Senators — including John Kyl, Joe Lieberman, Kirsten Gillebrand and John McCain — wrote to President Obama urging him to reject any proposal under which Iran would maintain a uranium-enrichment capability. "It is critical that the United States and our partners make clear that, given the government of Iran's patterns of deception and noncooperation, its government cannot be permitted to maintain any enrichment or reprocessing activities on its territory for the foreseeable future," the Senators wrote. "We would strongly oppose any proposal for diplomat [sic] endgame in which Iran is permitted to continue these activities in any form." (View images of Iran's official media coverage.)

The Senators' letter followed a statement made by Secretary of State Hillary Clinton the previous week that seemed to indicate a change in the U.S. negotiating position. She suggested that a diplomatic solution would include Iran exercising its right to enrich uranium for peaceful purposes, once it had "restored the confidence of the international community" that its program had no military objective. "They can enrich uranium at some future date once they have demonstrated that they can do so in a responsible manner in accordance with international obligations," she told a BBC interviewer.

Although the Bush Administration had taken the same zero-enrichment position demanded in the Senators' letter, until now the Obama team has been vague on whether it would accept Iran keeping a uranium-enrichment capability in a certifiably peaceful nuclear program. But Clinton's comments seemed to correspond with proposals reportedly put to the Iranians by Ashton. Media reports suggested European diplomats were offering a deal in which Iran could continue to enrich uranium if it satisfied transparency concerns raised by the U.N.'s nuclear watchdog, the IAEA, and agreed to a tighter and more intrusive inspection regime than the one currently in effect. Although Iran is not accused of currently building nuclear weapons, it is required by U.N. Security Council resolutions to suspend enrichment until it has satisfied the IAEA's concerns. But according the Nuclear Non-Proliferation Treaty (NPT), to which it is a signatory, once the IAEA has resolved the disclosure issues that had raised questions about its intentions, Iran has the right to enrich uranium for energy purposes under international scrutiny. (Watch TIME's 2009 interview with President Mahmoud Ahmadinejad.)

READ MORE
Posted by NO Base Stories of Korea at 12:16 AM